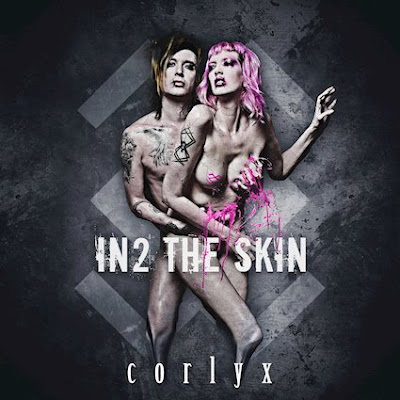 This Los Angeles duo drinks deeply of the industrial influence Alt-pop from the 90s. The production is more complex with more layers sitting in interesting places. The guitar has similar intent as that of mid-period Nine Inch Nails- though not as aggressive or dense. Vocalist Caitlin Starks has a tongue that drips with sex and slathers her melodies in it. Riding the line between organic elements and electronic propulsion.The second song is darker , though not as dark as what would be considered dark wave. They are more into getting laid than being melodramatic about it.  "Self Mutilation" has a weird groove with synths that have futuristic plastic sound to them. "Can't Get Enough" finds this project blending the elements that make them work into a solid hook.

Things darken nicely for "Dream Girl". It almost has a trip-hop feel. "Guys Like You" has a more driving groove. This is one of the album's strengths that is has a wide dynamic range. I like the vocals on "Twist Like An Animal" she is still keeping the sexy alto , but putting it in interesting emotional places. This song is also another darker one so that always wins me over. "One of the Used" reminds of  Lana Del Ray if she was guesting on a Depeche Mode album. "Hot Sex" would be great to listen to while meditating on the the album cover with a jar of Vaseline at hand. Where that song is a more primal expression of erotica, there is a smoother more sensual tone to "Deform". There is a well balanced bleed to the throbbing pulse.

I was not sure what to expect going into this. I was pleasantly surprised, if I was making a songs to fuck to compilation, which is not out of the question, I would put one of these songs on it for sure.  I like the unified concept of the lyrics and the nature of what they explore, rather than a bunch of evocative metaphor that goes no where. I will give this album a 9 as I like the mood it creates and can see my self getting many more spins from this album./>think fans of Curve and Lord of Acid would really be into this.  This album is releases on the 16th of August.