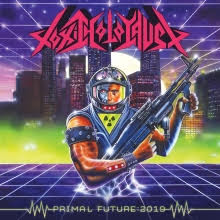 I will there have been some albums I have like by these guys the last one I gave much of a chance might have been 7 years ago though. Upon hearing the new album is there is more "Kill'em All" this time around . Coming very close to "Whiplash" at times on the first song.  I already own that album so it does not blow me away. This is the most accessible thing I have heard from these guys .  I am bored by the second song. Maybe ripping off Metallica is what is best for them."New World Beyond"  is much better and only rips off Sepultura in tone, not directly from a specific riff. The production is much more polished on this album. Then things begin to get stagnant.

The two songs after this follow a similar formula and are a relentless palm muted chug that bores me. The title track is better , but not better than "New World Beyond". A little more of a Venom hint to it. The it goes back to bland thrash, that sounds the same as the other bland thrash, it lacks the sense of menace I have heard from them before and the lead tone is very thin. After the solo there is a cool bridge riff, but the rule here is cool riffs alone do not a good song make.  The Sepultura mode is a better one for them as heard on "Controlled By Fear" I like the tasteful flourishes of double bass. Very inconsistent as the song after this defaults to dialing color by numbers thrash, with maybe two cool riffs in it.

The last song is ok, but I think this guy is better than just o.k in fact there were 3 or 4 songs that were pretty damn decent , but not living up tio what I had heard from them in the past. I am fine with them going in a more mainstream direction even at the cost of losing their edge, I think the song writing is just lazy and it feels like they just needed and album to justify touring. I will round this one down to a 6.5 , if you just want thrash or are a hug fan of this band, you might still derive some entertainment value from this.