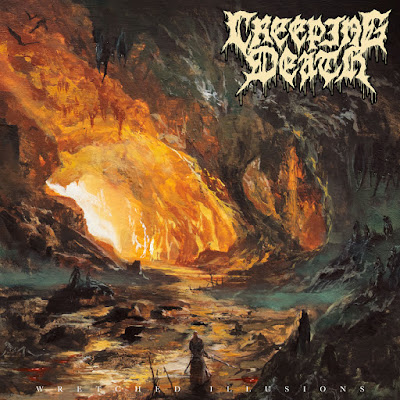 Regular readers of this blog know I often complain about Death metal, being a one trick pony working off aggression alone, while this is true it does not mean I do not like death metal, it just means I want more from it than what the current crop typically give me, though there are enough death metal albums I like every year to warrant death metal getting it's own top ten list at the end of the year. The opening riff of this band's new album made me start banging my head so that is a good sign. They also seem to care about writing songs which is an even better sign.They are steeped in old school death metal. They also give me some fucking grooves that keep my head moving. If I was going to compare them to any old school death metal band it would be Obituary. They have the same nasty slime coming off their riffs.

The second song doesn't not keep me engaged at the same level of hooks as the first , but it is still pretty decent slowing into more of a doom , place , but finding it's tense groove along the way. The vocals are a vocal growl as death metal should be . You can still make out some of the lyrics. They devolve into sheer speed alone and the snare thwack I am not the biggest fan of on "Bloodlust Contamination". "Sinners Torch" also find them veering down to the speed route until ,midway into the song, when it is time for the guitar solo. By the time "Corroded From Within" starts up the album begins to fade in the back ground , so I have to go back and give another listen. The vocals shift a little lower. The death doom thing begins to surface until the flow of double bass sweeps it away.  This is not a bad song, but the album could begin to use some atmosphere to vary the sonic space that is beginning to all sound the same. I can also hear some Slayer influence. This helps the riffs begin to hook me back in.

No matter how well written with out more sonic variation in the guitar tones, the songs are going to run together especially when they revert back to the speed thing. They bring it back to a more groove oriented chug on "Peeled From Reality" . The come back strong with the riff that leads into "World Decay" . I like when they lean into their more thrash influenced side. "Wretched Illusions" Is a double bass fueled machine.  The vocal find their place in the riff and do not sound like they were an after thought. Things begin to get murky again as the album comes to a close.  Though the riff to "Dawn of Time" is very deliberate.  It is not until we get to the solo section of the last song that there is a clear line setting these two songs apart. I will round this one up to a 9, as it gets off to such a strong start the more typical death metal moments are balanced out . They are more straight forward than I normally like my death metal, but too good at it to deny.