Overkill : 'the Wings of War" 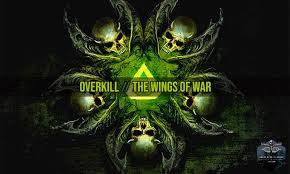 Having heard good things about this album I decided to check it out. I used to love these guys in the late 80s. The opener finds the bands returning where I left off with them in the early 90s before the coming of grunge threw thrash bands a curve ball along with them scrambling to make their own "Black Album". The second is faster faster and more hard core tinged. Bobby's voice which is one of their more distinct qualities is intact as has stood the test of of time well. In fact it might sound better , as he actually singing more while retaining his gritty higher delivery. Along with the bassist Bobby is the only other founding member. However Jason Bitner is playing drums for these guys now which works for me.

Though I am not sure about the chorus to "Head of a Pin" though the verse riff is fine with me.  The chorus is also a little weird on "Batshitcrazy". Choruses used to be their strength thinking back to songs like "Hello From the Gutter".They bounce back with "Distortion" which plays to their strengths.  "Mother's Prayer" is ok, but they have already done better on this album. "Welcome To the Garden State" is a thrash punk anthem to their home. Fun, but not the best writing of their career. The darker more powerful " Where Few Dare to Walk" might be the album's best song. It kinda of swings like a Metallica song, but packs a punch in more of the right places.

"Out on the Road Kill" is so straight forward that is has more of a rock n roll feel. There is a solid groove to it and the drumming is really fantastic. They lock into some pretty solid classic Overkill sounding thrash for the last song. nothing as adventurous or ground breaking as the other songs but it works. I will give this album an 8. It might not be as good as there classic material which this album made me want to go and search for , but far far as post "Horrorscope" albums go it fits nicely.