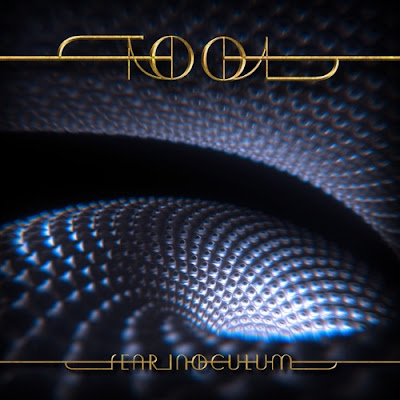 13 years has passed since "10,000 Days" was released. That in itself being an album that was not the band's best as they began recycling riffs from their previous album. After this 13 year wait they have a released an album 7 songs  in which all but one are over 10 minutes. The problem wit the first single and title track, was it was long and ponderous lacking most of the coiled punch that makes the band work. Granted it's been since "Laterlus" they have been on this winding prog road. Even that album knows when it's time to rock and cares about the songs. One second listens to the title track it grows on me by maybe four degrees higher. It still like they are warming up ideas recycled from other songs. It's also not that heavy. "Pneuma" opens with a strum and pattering of exotics drums.Much like "Schism" it works off a building and odd time signature to bring the tension. It's almost a rip off of "Schism".. I do like the vocals to this song better than the first.  The vocals are the only thing that make it work and not a total carbon copy of  "Schism" as the instrumentation is going for that even in how it's arranged.

"Descending" continues the trend of "Laterlus" resurrection this time pulling from songs like "the Patient" and  "Parabola". If you do not hear it , it is because you do not want to. This puts all the weight Maynard to vary the vocals and retain the song's identity, which he does better in some places than others. They would not be the first band to plagiarize themselves , but just how progressive is it?The guitar solos on this is Adam Jones's moment to shine, though the melody it reverts to is too familiar. In the atmospheric break down there are some new sounds that get drowned by rehash, though it's well p[produced and executed rehash.  "Culling Voices" starts off giving me hope that perhaps I will get just one that does not sound like something else I have already heard from them. Midway into the song it begins taking on a sense of familiarity when the guitar kicks in for the predictable build up section. 'Still nothing all that heavy or aggressive. Which is  what I feared as what is heavy in 2019 has progressed where these guys are still where they were in 2006 and truth be told when that album came out it did not seem as heavy as they once came across.

"Chocolate Chip Trip" is it is Danny Carey doing a drum solo to electronic noises. Drummers will be impressed I am sure. If the most original thing is their take on "Moby Dick" well that is no good. They end the album with the 15 minute "Tempest". The droning clean guitar that opens the song drones in a way that displays where some of the fat could have been cut from the start. Minute and a half into it we get the first riff where they are actually rocking out. Maynard's vocals are more aggressive. The grove is not original but thanks to the vocals it works. There is a "Dazed & Confused" middle section where Jones should pull out the bow that they jam on for sometime. This song does redeem some of the more indulgent moments even though it's 15 minutes and nothing 100 percent new from them  it is well done. All the this album is well executed so that is why I am rounding it down to a 9 and I am tempted to take it another notch down to an 8.5 for making us wait this long for warmed up left overs.But maybe it will grow on me. It's a step down from "10000 Days which had many more moments of originality  I think this album will work well live because rather than decided which of their classics to play they have written a medley that pulls from all of them. Nothing new to hear here.