Portrayal of Guilt : " Suffering is a Gift" 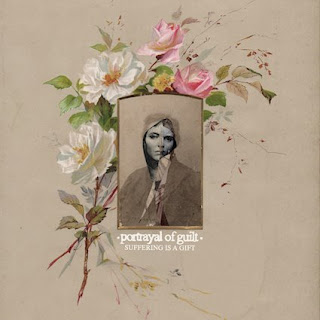 Going into this with 5 hours of sleep from a manic episode, I thought , perhaps I am not n the right frame of mind for this one. It turns out i was in the right frame of mind for it.  even when it comes to grind core or power vio-lence I need to know you are writing a song, not just making noise, so i can not count the first track of this album. They do a much better job of song writing on " Scarcity" and write a dark little hard core ditty that I find pleasing to my ears.  When you are used to listening to doom and black metal these kind of album can be hard to review , because you think it's all one song rather than a song that is a minute long, so I look up and the album is almost over. "Dissolution" is pretty dissonant. I am not sure I am buying the supposed screamo thing . They are just more melodic than grindcore.

They do come up with some pretty cool dark shit,"Moral Decay" is another example of this. I just wish they could commit to more than 90 seconds at a time as it is sonic blue balls. If  " A Futile  Light" and the previous song were one song then you would have had one great song. What you get instead are two incomplete pieces that have cool sounds. The last song is a whopping 2 minutes so lets see how they do when it comes to writing a real song. It's more on the hard core side with abrasive noise mixed in. Which would have worked if it was not  sacrificing a chunk of the song to make this noise. When you are writing 2 minute songs there is no time to waste.

Some of you might be surprised that I like this as much as I do. While it's only 8 minute and this year the battle for me has been lots of bands with good sounds not many bands with good songs, if these guys wrote a song and did not clutter it with noise they could be onto something. That something they are onto is why I am giving this one an 8. It is obviously the darkness they tap into which is what I like. I like darkness. It feeds my personal sense of evil. The world needs more evil.  Comes out August 30th on Closed Casket Activities.