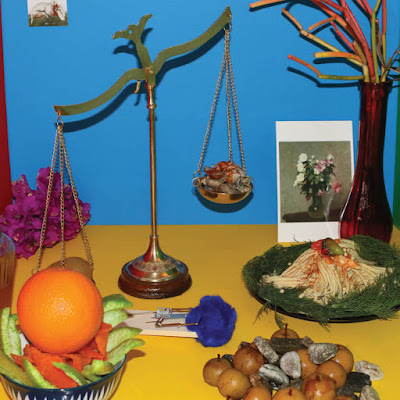 Saying I have been a big fan or these guys might be an exaggeration of admiration. I began following them when they released "No Youth" back in 2012. Since I have typically made it a point to check out and review their releases since. Am I enough of a fan that I would leave the comfort of my house to see them if they came into town ? It would really depend on who they are playing w ith and unless money was flowing like wine at country club, not likely I would spring the 20 bucks on a shirt. If you have read this blog on a some what regular basis you might predict which bands that would happen for. The new album does interest me as it seems to be a darker turn. Imagine if Andy Dick was  making a goth album it might sound like the opening track. I know I brought up the King Missile comparison on the last time I reviewed these guys, but it is back. There is more going on and it's more experimental and dynamic.Things begin to take an even darker tune with the somber musing of " Eris Came to Me at Night' . I had to give this one a second listen,as it is very subdued and works of a murmured narrative.

I really like the cold robotic groove to the surprisingly melodic 'stubborn lake"   The go back to the more King Missle sound on "What Goes In and Comes out". It works but not the best song on the album as I prefer the previous song. Heavy is not a currency they are really dealing in on a regular basis , but comes closer with the anguished vocals of  'what IS A Gift. "."in uniform" is almost more atmospheric than a song, since these guys stock and trade is all manner of weirdness I will let it count as a song.  "Dumb Forest" is an interesting commentary on sexuality. It's back in the King Missile mode , but the lyrics make up for a great deal.  I am big on lyrics and a song that might not win me over in and of itself, can tip the balance with good lyrics. "Amends" is another timid song that sound like Bright Eyes on harsher drugs and what ever Conner does. He comes closer to singing singing here. The beat is minimal and jagged. These lyrics are more self depreciating and not as appealing to me.

The album ends with a denser heavier sound, but heavy in the same way Xiu Xie, can be. Only marginally darker than previous songs. It goes progress into atmosphere. I will give this album an 8 there are a couple songs I really like, but it is not likely I would listen to it on a regular basis if it was in my iPod, if you are a fan of the more avant garde, post industrial scene,tho would be a since addition for shuffle mode in following up an album like new Pinkish Black.Being relased on the Flenser.