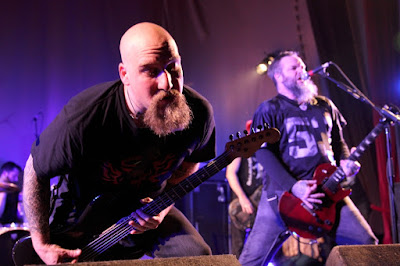 Normally reluctant to go see a band who is not touring behind new material, I had not seen Neurosis since the “Times of Grace” album , so 20 year wait was long enough. The material between “Times of Grace” and “Given to the Rising” was hit or miss for me. Their last album was in a more Pink Floyd direction, but the fact The Bell Witch was opening sweetened the deal. I walked in during the Deaf Kids set. It worked off an energetic drone which provided a dramatic contrast to when Bell Witch took the stage without no far fare at all, It was like they check playing right through their line check,.They proceeded to play one long song that was a delicate throb with occasional vocals . I love funereal doom, but need more dynamics than what they gave that might, though watching the bass player pull it off was interesting for the first 10 minutes.


22They opened with the slow pulse of “A Sun That Never Sets “ . 13 minute songs are ambitious openers, but it worked for these guys when they took the oddly barren stage. No projections  or crazy lighting. As I told a friend they played all their Pink Floyd sounding stuff without the Pink Floyd light show. Lars Von Till had a much more commanding stage presence than Scott Kelly who looked like he had fallen asleep watching football and awoken to play the show. They followed this with “My Heart In Deliverance “ from the “Honor Found in Decay” album. This 11 minute song found the drums picking up from the droning lethargy and gaining more traction. They keep the mood droney for most of the songs from “Honor Found in Decay” though some what more stripped down than the album version. Stepping on the distortion as needed with the chanted “in a show world part “ really kicking the most ass .


I had forgotten  how good of a guitar player Steven Von Till is. I think Scott Kelly’s solos projects tend to get more of a spotlight so Till doesn’t get as much acknowledgement as he should. The title track from “Given to the Rising”  was the first song where it felt like a metal show. The more post-rock like “ To the Wind” worked well live as it had atmosphere tempered with heavier punch. In last two minutes proving them the grandfathers of sludge. Things stayed heavy when they went back to “Times Of Grace” for “End of the Harvest”.  Pulling from this time period of their material the last song from “A Sun That Never Sets “ seems like a good choice. If you like Neurosis then this is a tour of deeper cuts, if you like their new stuff it will be even better for you. Either way they are total prose and it is good to seem them without or without the balls and whistles even though I was hoping for something of “Souls at Zero”
Posted by Wilcifer at 7:56 PM