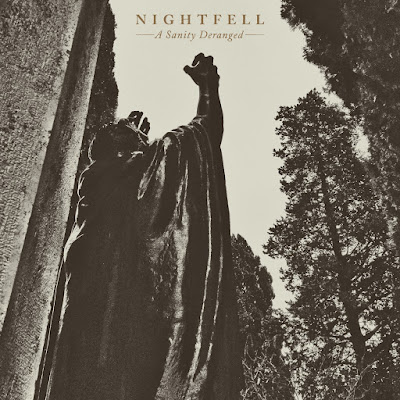 The first song is an odd mix of  death doom. It starts off more doom and builds into death metal as the pace picks up. Things get darker and have more emotion on the second song. It might have the buzz of tremolo guitar it is closer to death metal than black metal. There is no shortage of grim atmosphere. The double bass steers the song into the death metal side of this band. There is a thicker atmosphere and more of a mournful mood to "To the Flame". So far I think these album is heavier than the first two, but with that comes less of that crushing chug they once carried. The songs are also more droney. monk chants buried behind the distortion and the builds are more subtle, it might be a heavier record, but it is less explosive.

The descent into doom continues of " The Swallowing of Flies". There is not as much that sets this song part from other bands that do this sort of thing, and believe me in 2019 there are a ton of them. They do pick up the pace and double bass comes thundering in. They end the album with the title track which is another lurking doom song. I do like the fact it is dark and depressing. The vocals are also a nastier growl. This makes them harder to under stand than previous album, but also more of a texture and less adhering to the rules of songs, which can work for or against them. Three and half minutes into the song and it picks up into a throbbing gallop. This creates more of a black metal feel.The drums continue to drive the song faster and harder. Everyone else slowly responds in kind.

There have been a massive influx of death doom bands, it's hard to say these guys are jumping on a band wagon when they have been at it for some time. They are leaning into the doom side more , and I doubt Portland is a vacuum where they are unaware of what is going on in the bigger metal world. I likes this album. It is easy to listen to. I loses a little of it's steam as it progresses , but the strong start makes it memorable . I will give it an 8.5. If you are a fan of this band you should like this unless you are spent on death doom. This album comes out Sept 13th on 20 Buck Spin.
Posted by Wilcifer at 8:31 PM