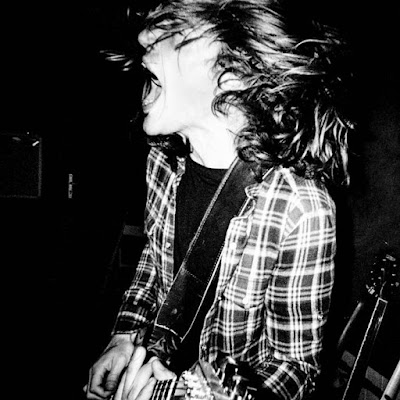 This French band's moody and hypnotic style of indie rock that has elements of shoe gaze and post -punk in them . There is some psychedelics in the mix too if we are talking about early Pink Floyd as it also has a 60s garage feel.I get to working on something else and the album loses my attention. They have a similar static strum to many of the songs, but I went from the first song to the 5th without batting an eye or being aware this was not them jamming out the first song.The second song melted into the throb , with "Wanna Be Damned" as the first song that jumps ou like Sonic Youth Youth covering the Stoogers. At 11 minutes "Sink" is very indulgent. The vocals are an improvement as they have more feeling behind their whine. There are so cool Pink Floyd like guitar moments later in the song. But cool riffs alone does not a good song make.

"Midway into "How I Feel" things come together. This s how a dark dreamy groove should be done. "The Bad and the City Solution" has the thump of a distorted bass to carry it. It almost gets as heavy as metal. Though run through a filter of garage rock noise. Not straying for instrumental interludes, they wrap the album with the last song called 'walk By The Wild Lands" . This also has a darker sound that reminds me a little of early Pink Floyd. When the synths come in wit ha 60s organ sound this Pink Floyd thing is only given m,ore credence. It sounds really good but this is not the album I thought I was signing on for , so it takes a little adjustment.

This album is weird. I like that it is moody and hides it's heart under gray clouds. It is however no punk punk, but more of a [psychedelic garage rock.  The nods to the 60s are numerous. I will give this album an 8.5. I bet these guys are a great deal of fun live. The album can be on the obtuse abnd cumbersome side but they eventually come out on top and make it engaging.