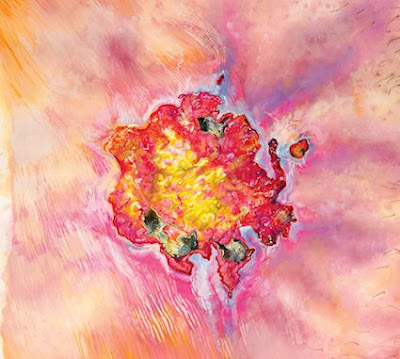 This band's  riffs are very angular and when the double bass gives it more punch they are no just falling in line with your average death metal. The vocals are a unearthly low growl. The opener is the longest song at almost 11 minutes. When they lock into the chug they are more death metal. The pacing is doom like, but I feel they are more of a death metal band than they are doom. They could get lumped in with the death doom trend , but their riffs are smart and they care about their songs rather than just being pleased with having captured a sound. As with most bands that are extremely heavy it could be the sheer weight and power behind what they do that impresses me so it remains to be seen if they will be able to keep my attention going into the second song. Midway into the song things get creepy with strings chiming in and creating something that might intend to be like My Dying Bride , but it doesn't capture the woeful despair they did as the meat of the metal does not wane or give the strings the breathing room to do so. The plus side of this is it means even when these other instruments come in to add to their sound they do not compromise it.

"Song of Embers" opens more melodically than the first song. Three minutes later when the vocals come in they get more into a weird atmospheric death metal thing with a taste for doom. The vocals are layered with higher rasps that I suspect might belong to their violinist though she is not credited with vocals so they could be overdubbed layers too. The violin midsection of the song, takes the more romantic chamber sound and blends it in a direction with nothing in common with My Dying Bride , but a sound that is all their's.  They go for a more straight forward heaviness on "Transfiguration of Flesh Into Dreams" .  By straight forward , not a steady flow of Cannibal Corpse double bass, but more focused on the crunch than atmosphere. That makes them still more adventurous than most.  "The Leech Called Shame" also sticks closer to having the emphasis on heavy.  The violin does play a larger role in the mood of the song so this gives it a wider dynamic depth. The violin has a more interesting role to help compensate for the vocals that begin to become a one trick pony.

"Valediction Prayer" is darker and more murky . There is more dissonance in the verses. By verses what appears to be the main riff as they do not follow the typical song structure. The drums shift underneath it in a more progressive fashion.There are some faster passages that border on blasts thrown in , but I would not say anything about this project owes much to black metal.  I am three minutes into "Sink Beneath the Waves" before i check back in to the song, prompted by violin. Otherwise this falls pretty close to your more standard death metal of thinking man's variety, They never have moments that are boring some are just more engaging than others.    This album comes out September 13th.
music wise the best that is available is a preview on their Facebook...https://www.facebook.com/watch/?v=2151755125155020
Posted by Wilcifer at 4:21 PM