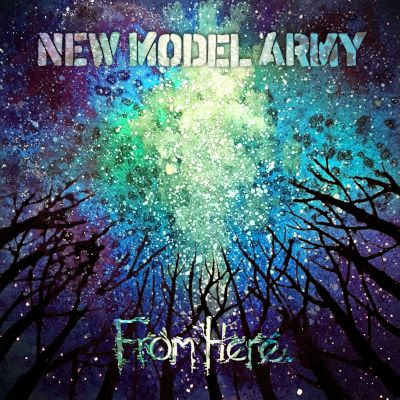 Right from the first song what I like about this album is the return to a darker sound. There is not the rambling folk sound of dusty western roads that colored the more recent albums from these guys. It builds into a more dramatic and heavier take on the folky brooding.  "Never Arriving" has a cool drive to it and coasts along darkly. The more rowdy strum of  folk punk stirs on "the Weather" . The drum sound is really dialed in on this album. This fact is highlighted on "End of Days" which has a story build to it . The vocals on this song are also really strong. So far this album is one of their strongest lyrically. By the time we get to "Great Disguise" the album begins to take on a more uniform feel. Sonically the same colors are being used. There is a tension in he drums and the strum of acoustic guitar layered over it.

The mood shifts to more introspection on "Conversation" . This was needed as the dynamic shifts breaks them from the formula I just mentioned. It is amazing that after 40 years they could make something this fresh sounding. There are a group of fans who are going to want the more punk side of this band and not going to like this , but they have not iked them for years so who cares. While there is not a punk feel, they do find moments where they sound more like the Cure if they were more surly blokes getting into bar fights, which is close to punk. Just being dark and tense doesn't always work, tough uit is not a total miss on "Hard Way" it just doesn't grab me as strongly as the previous songs. "Watch and Learn" is more upbeat and has a great bass tone. It however works of a very similar strum to what we have already heard here.  The strings on "Maps" helps break things up and takes it in a darker direction.

"Setting Sun" has layered levels of atmosphere as well, but as a song is not as interesting as the previous one. It ends with the last song which works off a 8 minute pulse. I will give this album a 9 and see how it grows on me. I like the fact it is moving out of a folk punk direction and back into a darker place.