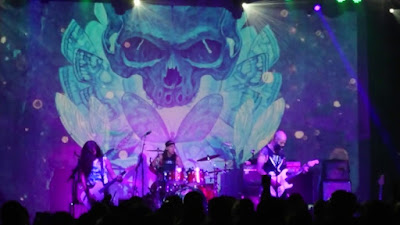 Going into this show, I had heard every Baroness album, but really only listened to the first and “Purple” with any regularity to a notable degree, though I gave the new one a handful of spins as well. My interest was piqued when I heard Pallbearer was one of the openers. This turned out to not be the case. Instead we got the War On Women, a band whose most recent album did not do a lot for me. They proved to be more entertaining live. This was largely due to the stage presence of singer Shawna Potter who more Debbie Harry than riot grrrl. They knew with Baroness’ crowd who were wearing more Tool shirts than anything else, this was outside of their demographic, but they still played with a great deal of heart trying to win the audience over which they did a somewhat decent job of. Baroness are not only total pros on stage , but hit you with an infectious energy. It was not the kind of spastic acrobatics a metal core band might employ but honest enthusiasm. Honesty is the world that best encapsulates their performance. It seemed the newest addition to the band Gina Gleason played with something to prove. She melded her voice and playing well to fit the band.

This was almost like a hometown show, since was John put it they are state mates . Did not totally beat the audience over the head with the new album. There were some of the more impassioned yet mellower moments. Though these guys are not a metal band . considering for all practical purposes they are a prog rock band who plays progressive rock in a manner that does not forsake their more punk rock past. An upbeat tension possess his taunt strumming. The Frenetic energy made it hard not to bob in time to the music. By the time they got to the encore the crowd was locked in for the hits like “Shock Me” if things had not come to a halt for the band with the wreck I think the Purple album would have pushed them past the venues of this size, in doing so it might have sacrificed some of the bands most endearing qualities .

The set leaned heavily and the new album and the “Yellow & Green” album. They did play “Isak” from the “Red” album during the encore and touched on the other albums as well. Going into the show I would say I was a marginal fan of the band who had more of an appreciation of what they did than a regular listener , though on this night they won me over. Which by merit of their live performance is a hard thing to do since I have seen almost every at this point setting the bar pretty high . If you are even a passing fan of the band I would encourage you to catch them on this tour as they have really hit their stride and the new guitar player is well settled into her role.
Posted by Wilcifer at 11:39 AM

Email ThisBlogThis!Share to TwitterShare to FacebookShare to Pinterest
Labels: Baroness, Live review, the War On Women