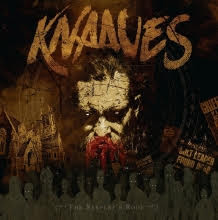 This band features the former bassist of Enabler. Like Enabler they play a dark discordant version of hard core. These guys are more blown out. The opener is strong. The second song  "Weight of the Crown" is what you want from metallic hardcore. But hard core band are a dime a dozen and I need to hear what is making these guys different and puts them ahead of the current pack. Just being aggressive and unrelenting does not cut it as that is the bare minimum for hard core band. They keep my interest for the first two songs, then I find myself asking what else can they do ?  They have plenty of heft in their chug so that is not being called into question. There more interesting when she doubles his vocals. They are gruff where she has a higher pitched snarl.

After this things get a little murky and they start to default into what every other hard core band does. It rides the line between death metal and hard core at times . "Matriarch" finds them really digging into the rut of hard core. It becomes a blur of blown out feed back and pounding  drums. The vocals are senselessly barking at me. There is nothing to set this apart though they are good at what they do. They do have kind of a cool break down riff, but the rule here is cool riffs alone do not a good song make. "Down In Flames" benefits from the down trodden lyrics being able to cut out into the fore front of the song. The discordant guitar compliments the vocals well.

The album ends with "Ouroborus" which is the most interesting song. It is more industrial than hard core, This making it darker, I wish there was more on this album like this song. I will round this down to an 8 for when they get mired down in your typical hard core sound, but I do think  they have a great deal of potential and would like to hear what the future holds for them. If you wan dark pissed off hard core then this album is worth your time.