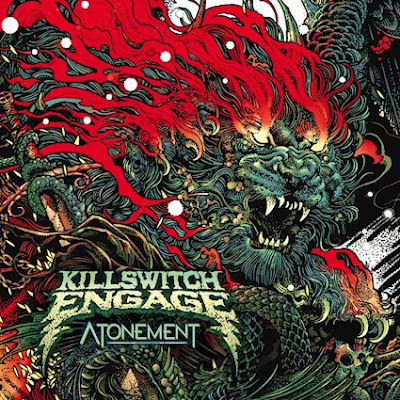 These guys pretty much defined Myspace metal. They did it very well. Now with original singer back for another, they seem to be carrying their own torch.The opener is stronger than the song that follows for sure.  Jesse finds himself in a strange position as he is trying to sound like the singer who replaced him. The sung vocal hook is not as strong as the the opener's . "Us Against the Wall"  dins the vocal hook getting back closer to where it needs to be.  They get into a more aggressive thrash feel with "the Crownless King".  It kinda reminds me of Goatwhore, with no black metal aspirations. Things get more melodic for "I am Broken Too". This is the strongest vocal performance so far. While there is some high school angst to the melodramatic lyrics of the song, it is the best song so far. More mid paced the tempo allows for groove.

The first song I take note of the drumming is "As Sure as the Sun Rise" . Th chorus vocal works, but other elements are not as consistent.  There is more of a Pantera side to "Know Your Enemy". The reason I continue to give these guys a chance is because when Overcast broke up half the band went to Shadows Fall and the other half formed these guys. The more nu-metal moments to "Take Control" as well written and hooks you in, even though they are really going for the Sirrus radio crowd. Sure it doesn't touch where these guys once were at their peak, but it is one of the best moments from where they currently are at. The big break down tinged metal core riffs show up on "Ravenous" which gives way to the sung hook. I think even with some of the more commercial moments this is a heavier effort than we have heard from theses guys in a minute. "I Can't Be the Only One" sets a more pop metal vocal against thrasy guitar though the shoot for the FM dial with it.

When they get heavier on the last song it feels like they are trying to hard to prove they still are mean. I  hear they can play it, but I am not convinced they are feeling it. I will gie this album an 8. It is not their best moment nor their most inspired. It is however generally well done and the stronger songs balanced they ones they are not feeling as much. If you are a fan then you are going to like this , as it will give you enough of their varied sides.This album comes out August 16th.