Looking Back in Anger at Alice Cooper's "Trash" 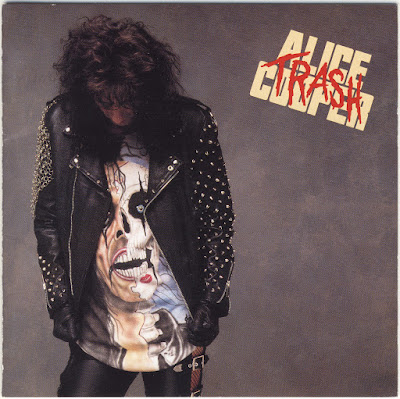 It's the 30th anniversary of this album so people have been sounding off about how much they like this album or thought it was under rated, so I think we need to stop and ask ...wait is it really?I had been an Alice Cooper fan for sometime when this came out so it was jarring. He just released his heaviest album "Raise Your Fist and Yell" before this one. I remember not feeling right when I saw this playing on Mtv wedged in-between Warrant and Poison. Even his image was toned down and he had more of a glam look. (see video below)  It can be argued that he influenced the hair metal scene and that would not be wrong, but was this him trying to fit in.   It opens with "Poison" the lead single off this album and his biggest hit in years. Just because you have a hit doesn't justify selling out. However it's ok as  the verses were darker then things got a little happy on the big multi-tracked vocals of the chorus. The opening riff to "Spark in the Dark" sounds like it is from a Lita Ford song. This is not bad , but a stark pop contrast to the heavier "Raise Your Fist and Yell" released before this. It is still a little darker than the more straight up rock songs from the 70's if we are talking about "Elected" or "Under My Wheels" .  The big chorus on "House of Fire" is more like Bullet Boys. The verse once again plays off a more authentic tension that feels more like him until we get to the chorus which is more Bon Jovi.

"Why Trust You " is more like Alice aside from the cock rock chorus.  I appreciate the effort he is putting into singing, but "Only My Heart Talking Reminds" me of a power ballad from Aerosmith's  "Pump" album. So no one should be surprised by Steven Tyler lending his voice to it. "Bed of Nails" has a darker opening passage than the other songs up to this point in the album. The main verse riff is more metallic, but when the vocals it sounds more like the typical cock rock from this period. The chorus is text book Desmond Child. Despite the cock rock trappings "This Maniac's in Love" is an Alice Cooper . More so than the others.The keyboards are questionable.  In 1980 the was about to be the last stand of cock rock along with "Dr. Feelgood" and "Use Your Illusion". The title track had enough edge to it for me. Jon Bon Jovi lends his voice to this song. Not the album's strongest song , but it's pretty decent for what it is. "Hell is Living Without You" is another ballad. Not that Cooper is a stranger to ballads. This one has enough rock with dark edges to make it alright, better than the other ballads on this albums.

The album closes with the more uptempo "I am Your Gun". It feels like it is trying a little hard. The bridge and the chorus and pretty silly. There are moments that feel like Alice , but this is not a Faster Pussycat album we are talking about this is Alice Cooper who is a legend, so how does this hold up to his other albums. "Welcome to My Nightmare " , "Lover it to Death" and even the album before this one were 10s, this album I have to round down to a 8.5 as it feels like he was trying to find his place somewhere he did not belong rather than doing what had defined his career up til point, which is make his own place.