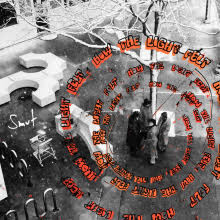 This band is deceptive, while upbeat with a 90s alt jangle there are some woozy shoe gazing glaze to the edges of the guitars. This sheds to focus on more vocal centered songs. The Sundays have to be this band's biggest influence as it is the closest sonic neighbor when it comes to the upbeat breezy indie rock that they are creating here. The melodies are flowing, but it is too organic, and guitar focused to really feel like pop. The melodies are not going for overt radio hungry hooks. At times it feels like easy listening for people who listen to shoe gaze and post-punk. The guitar is casually strummed on "Believe You Me" which could be indie folk, but some definitions. In the 90s it would have just been lumped onto alt rock radio. I could hear Taylor Swift singing some of these songs, but the detached less emotional aspect of the vocals is what gives these songs their charm.

There is a more upbeat swing to "Supersolar". I guess this is rock it does not have much attack as the guitar stroll at a strum. The vocals are not falling where pop would though. By the time we get to "Janeway" things are beginning to take on a more uniform palette of sounds. It flows better than the previous song, which was not ineffective this one just feels better on my ears. Even with that said it is not as strong as the first say four songs. The first time I listened to "How the Light Felt" the sleepy strum of acoustic guitar bathed in ambience breezed by not really capturing my attention. The second listen did not really reap many more thoughts; it works for what it is but fades into the background.

"Person of Interest" is more of a pop song. If not for the haunting reverb in the production, it sounds like a song that might have been playing in the background on the show "Buffy the Vampire Slayer" . The more surreal sounds they color this with, puts it more firmly as dream pop. The electronic beat to "Moringstar" is an effect shift in the dynamics. This makes it one of the album's best songs. The last song is another so unobtrusive that it breezes by without me forming a thought on it.  Second listen finds the melodies holding more weight. I will give this album 9 . It recalls an era of music that I was a fan of of, while looking forward into the future. This comes out November 11th on Bayonet.