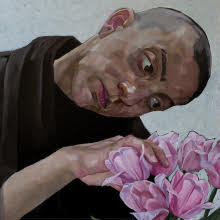 Let it go on records I am reviewing albums as fast as I can down here in Florida, but it is hard to resist when I have been looking forward to the albums I am being sent. This French hard-core band is ready to live up to the anticipation for their newest album bringing all the explosive energy and urgent emotional catharsis. The shouted vocals are very series, even though their anguished screams at time sound more like punk than what we think of as hard core today, but the term hardcore, used to be hard core punk, and this is a good example of what that is, while not just sticking to the most commonplace blueprint. The sonic passages, feel more like what screamo bands have been doing over the past twenty years. Even in the fact of all the intensity they are expelling in these outbursts, they have still crafted dynamic, melodic songs.

There are equal amounts of emotion, poured into the guitar riff as the vocals. When they step on the gas, they do not fall into the common placed trap of making the song feel rushed. The acceleration is tied to the unleashed tension. The lyrics are sometime buried in the overall picture. Aside from that the mix is stellar and the vocals were mixed back into the guitar intentionally. The drums also sound great. Lots of clarity and separation in the mix. "Confettis' find things opening up more for the vocals to have room. " Noah" recoils back into an almost post-punk like tension. The vocals are spoken rather screamed. The lyrics are very clever to this one. It sounds like how the looming storm looks in the sky outside my window. "Cathedrals" seems to run off the momentum built in the previous song. The bass playing in this song is pretty amazing.

"Nypheas" like most of this album tackles the mental issues that were brought to light when forced to sit with oneself in isolation. It goes from in your face aggressive to almost anthemic. The half time break down feel is very effective here. It is album's more melodic touches that make the punk rowdiness work better as the sphere of dynamics is balanced out. Having been around in the 90s for the rise of emotional hard core, I can say this album gives me similar feeling as to when I heard those early albums by bands like Converge and Hot Water Music when they came out. His actual singing has improved on the few songs where those surfaces. Things get a great deal darker and heavier with "Rodin". The deliberate pounding is very impressive. They continue to break things up jangling guitars and more thoughtful vocal passes with "Winter Yet" which has an almost jazz like feel at times. Some of the nuanced interplay between the bass and drums, proves what great musicians these guys are. They do not need mathematic acrobatics but work of jerking grooves. This album is without a doubt a 10 and a must for anyone who wants emotional hard core with a sense of adventure/.