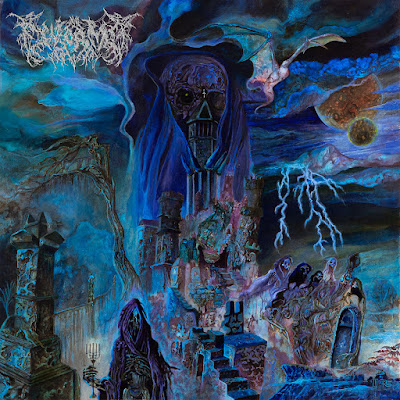 I really like the "Foreverglade" album these guys released. This EP is meant to introduce a guitarist who is a new edition to the band, and it does that well. There is a great deal of stelar guitar playing on the eleven-and-a-half-minute title track those kicks things off. However, despite being an opus of tremendous proportions, the songs writing is not as impressive as what they brought on their last album.  There are cleaner more pristine tones. There is more space, thus allowing for monks chanting in the background. In using these sounds, it is not as dark or oppressive as the previous album. The first song in its eleven and a half minutes wanders more than it pound the point home. The atmosphere so thick it never solidifies, but the mood and playing is still pretty spectacular, if not sterile in the clarity of the mix.

"Centuries of Ooze 2" starts off with the kind of guitar solo that could just as easily been found on a Joe Satriani album, it takes the heavier darker middle section of the song to give things more direction. The chanting of the monks in the background replicates the kind of feel they started with on the first song. The interlude "Invoking the Dragon Moon" is more of an exercise is shredding and makes little attempt to be a song. This kind of guitar wizardry is what this album becomes fixated upon. It comes cross to me as more about a sound than a song. While the band themselves claim this shuts the door on what they were doing on their last album it can be a difficult pill to swallow if you are not here for the guitar solos. I appreciate the ability it takes to pull it off but feel if it does not work with the song and bring value its purpose is more masturbatory.

The circular jerk continues on the last song, though the intentions are more obscured by ambiance. At times they seem to want to go in a black metal direction as the vocals rise from the lowed gurgle that dominated the album for more of scream. There are blast beats and everything. This shift does offer more possibilities in regard to song writing. While I am not as wowed as I was by their previous album, I can hear the talent here It might not be directed in the manner I prefer, but they did accomplish what it is they set out to do here, with that said I will give this album an 8. Being released on 20 Buck Spin.