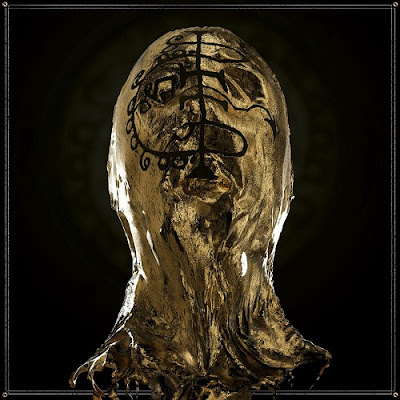 This is the third album from the Portuguese black metal outfit. The opening track is impressive in the sonic scope that it covers outside of the bounds black metal is most commonly defined by. The vocals are coarse, not screamed in the same manner, the blast beats are no what it lives and dies by, well that is until the second song where the more melodic components of the first song are dialed back, and they give into a feral lust of savagely lashes out at your ears with their instruments. They are good at this, but unlike the first song it sounds like every other band playing extreme metal. The production is very refined, rather than rougher cavernous sounds more commonly heard in black metal.

"Deluge" finds the drummer as a prime motivator but holding back and setting the tone with a groove. The guitar also has plenty of room to breathe, the vocals are the one constant in the extreme sounds department. Just past the two-minute mark they give into their craving for blast beats.  They are not trying to worship Satan and seem to offer a bleak narrative on the urban landscape. The black gaze similarities can be heard in how this song progresses. They are more committed to brutality than say Deafheaven. " Arson" follows a formula more closely related to other black gaze bands with a more atmospheric post-rock intro that builds into an angrier explosion of black metal.  "Ebb" works off the stormy buzz of tremolo picked guitars that conforms to the most basic core of black metal. The groove and melodic moments of the song are more fleeting than they should be though to the band's credit allow themselves to shift away from the blast beats over the course of the song. The vocals have a noted expression of anguish in their emotive display.

The ominous manner the chords hang in the title track is more interesting than when the drums pour on the bursts of speed. The syncopation used as the theme works really well. The album needs more moments like that to set itself apart. This also makes the more common place trapping of black metal sound more unique when they are not the only color you are being blasted with. "Mantle' is more of a straightforward black metal blaster than falls in line with the expectations of the genre. The last song certainly starts off in that direction. It does gain its bearings and allows melodic themes to take root. The double bass rivalling the blast beats at times. I will give this album an 8.5, It is certainly one of the more polished black metal release this year and these guys are skilled at what they do. What they do could be even better without feeling obligated to conform to some of the standard black metal formulas.