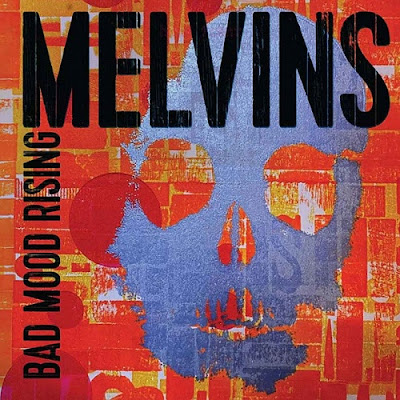 Some things are expected with a new Melvins album. There will be a degree of weirdness. The opening track of their new album finds this degree dialed up to the high end of their weird spectrum, before they amble into a rock shuffle that is slightly disjointed. It glides on the fringes of what metal would be. There is a creeping hesitation to the primary riff that drives the song, and the vocals could just as easily belong on a Ween album.  Five minutes into the song it falls apart and slowly tries to spasm itself back to life. These guys show you might start off as a border line punk band, but the longer you stay in the game the more you become closer to prog. They let the song fall apart and weave it back together in sinewy grunge jams.

While the first song does not deny they are talented masters of a game thy have paid their dues in, the second song has a darker more commanding chug that I like much better. While I have always known that Kiss is one of their influences the first song I have heard in some time where you can hear it if you listen close enough is "My Discomfort is Radiant". The swagger of the vocal melody sounds like something Paul Stanley might did in his midrange.  The use a similar palm muted chug that has been a theme of this album, though the chorus is bigger and feels like a Frank Zappa rock anthem, so refer back to my previous comment about prog rock. I really like how the vocals are produced on this album. A dreamy glaze washes over the guitars in the second half of this song.

"Hammering" pulls out a riff that seems it came right from Ace Frehley. This gives the song a 70s strut for sure. The vocals do not seem to fit as well as they did on the previous song. They rock it out pretty well on the last song, the weird is more on the outskirts of the overall sound swirling around their straightforward rocking. Overall this proves to be a very solid outing for the band doing what they do best, I would not say it's as heavy or sludgey and more like something to pack the bong to I will give it a 10 .