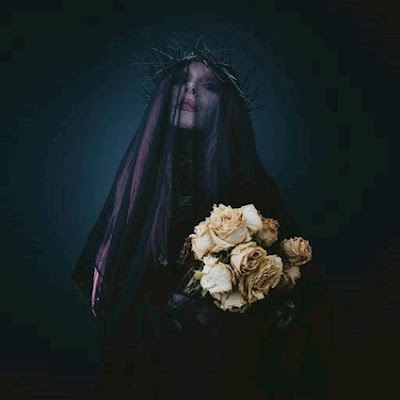 When I recall reviewing the previous album by this band, I seem to remember like the sound they are summoning, but the whispery delicate vocals feeling like a one trick pony.  Has she grown as a singer is the question I go into this album with. Everything sounds cool on the opening track, but an entire album working off this one dynamic would get old for me. Slow syncopated droning sludge is what this sounds like if you took the vocals out of the mix. Her melodies sound a little sharpened in the ethereal hooks department. I am not sure about this being doom as there is almost a Deftones like groove to the riff that opens "Bright Eyes". This time in the studio they arrived with more punctuated choruses.

The title track finds the band getting heavier with the ambiance and creates a more Jesu like throb in the wave form manner the dull ache of guitars glides. "Ipecac" has a less metallic motion to it until things get heavier in terms of the crash of drums crunching into the guitar. By the time we get to "Stars" I notice the songs taking on a uniform sonic signature. The formula seems to be hold back with tension on the verse then build into a more rock-oriented crash of guitar on the build of the chorus. Effective until midway into the album when this begins to make the songs all sound the same.

On my first pass though this album once I got to "Roses" things had taking on a monochrome drone that faded into background music rather than a song that was engaging me, it was not until I went back into the album that I was able to distinguish the songs. The arrangements taking on a more minimalist progression. "Sacrifant" finds them putting the pieces together in a more effective way and shows by getting the guitar to carry the attack can still make for a damn good song. "All the Things I Was" works off a similar dynamic but is less catchy.  I like the melody that is carried by the drone of "Song for the Dead " The last song kind of drifts and drones like the bulk of the album, it's just less catchy. I will give this album an 8.5, I think their song writing has improved for sure and the formula has shifted.