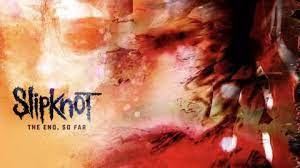 Every metal band likes to go into the press gauntlet before releasing an album and tell them how this is going to be as heavy as one of their really heavy albums or it's their heaviest album yet is also another classic. None of these are close to true when it comes to the new Slipknot. They try to resurrect their classic sound at time completer with dj scratches. But Vended doe Slipknot heavier, however these guys are better songwriters. Strable enough the album opens with a ballad. Of their step back into making old things new again, "the Dying Song" works best in this regard.  The claimed "Yen" sounded like Type O Negative, I am guessing they never heard Type O Negative. It's a pretty decent song, but it sounds like Slipknot, just brooding more on the verses, but not anywhere as dark as Type O and while Taylor's vocals continue to improve, he is no Peter Steele. There is a cool riff toward the end, but the rule here is cool riffs do not a good song make.

"Hivemind" is pretty typical Skipknot, with little room for these guys to deny being nu-metal. The vocal hook on the chorus works well. They are just better song writers than 97 percent of the other nu-metal bands which is why they have sustained their career. There is less hook to "Warranty" which is the band thrashing along the middle ground in terms of heaviness, as they might have been impressive when they came out in 1999, but 23 years later, music has changed in terms of what is metal. Even though it's not heavy "Medicine for the Dead: us a really well written song that works incredibly well and serves as a reminder this band can deliver even if they are no longer as consistent. "Acidic' is another song that is not heavy but works off a soulful bluesy energy that compensates for the hard rock direction.

"Heirloom' is another song where they dust off old sounds and try to breathe new anger into them. What they have going for them is Taylor's sense of hooks, though it also makes this feel more Stone Sour. This song grew on more than some of the others. "H377" Is heavier but it feels like they are trying to hard without yielding much in terms of drawing me into the music. With that said and further illustrating the lack of consistency they dial that song in then deliver the album's best song with "De Sade: They last song is a big epic production rife with dynamics, but it feels kinda of empty in places to  my ears, but for every moment like that Taylor balances it out with a smart vocal line. He pretty saves the album and proves he is Slipknot.  . I will give this one a 9, as it is clear they are doing what they set out to do even if there is some misdirection regarding what that is. They are still nu-metal, but happen to be a band that proves nu-metal is not limited to ADIDAS flavored rap metal.