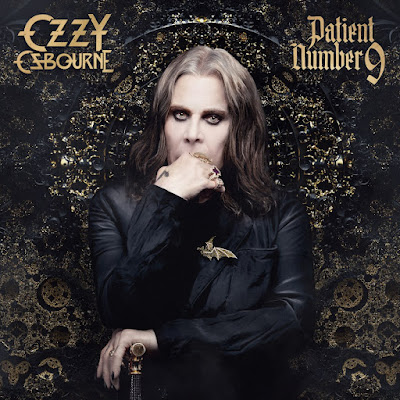 Releasing album 13 at the ripe age of 73, Ozzy is holding up better than expected, especially when you consider the tour cancelling issues of the past few years. This album has less of a pop sheen and feels more like a rock record than "Ordinary Man". The only song he gets help outside of the buds he brough to the studio is the title track and lead single that opens the album. It comes by way of pop songwriter Ali Tamposi , who has also worked with Kelly Clarkston. Despite this fact it is darker than expected until the chorus, which is the only part of the song that has a touch of pop to it in the hook. Jeff Beck plays guitar on it, so you know that is going to be solid. Pearl Jam's Mike Mcready plays on the second song "Immortal" which is a great deal beefier than even Pearl Jam's old grunge sound. The chorus is kind of bright, but it works.
The drums on this album are handled by Chad Smith and the late Taylor Hawkins. Not the biggest fan of either but they get the job done here with some extra flair. Zakk Wylde shows up on the even heavier "Parasite".  Robert from Metallica also plays bass on this album, along with Duff and Chris Chaney, so he was smart enough to stack the deck in his favor with people from his past. So far at this point in my initial listen, "No Escape from Now" is my favorite song on this album, which is head and shoulders over anything on his previous album. Despite not liking the lyric about not believing in Jesus, Eric Clapton, still played on "One of Those Days". I still think Eric Clapton is overrated. The song is also more rock than metal but a fine vocal from Ozzy saves the day.
Jeff Beck returns for the power ballad "A Thousand Shades", which is less impressive than his previous appearance on this album. This sounds like a B-side from "No More Tears". With that said it is still better than what most can muster. Until Zakk rips it, "Mr. Darkness" felt like it could have been on "Bark at the Moon" .   He gets back to his more shadow filled take on power ballads with "Nothing Feels Right" which is pretty much a solid formula for Ozzy that still works for him. The playing on "Evil Shuffle" is more interesting and grooves much better.  Toni' straps on his legendary axe again for "Degradation Blues", which sounds more like solo Ozzy than Sabbath, though there are a few elements not on like "the Wizard".
"Dead and Gone" is somewhat straight forward, though still steps out of the bounds of what Ozzy typically does. All the pieces work really well. "God Only Knows" is a more formula heavy power ballad, with some cool nuanced guitar thanks to Dave Navarro. Though it is not one of the album's strongest songs as the bar is pretty high here.  "Darkside Blues" is more of an outro than an actual song. I will round this up to a 10 and see how it grows on me, but it is one of his most impressive offerings of the past couple decades.
Posted by Wilcifer at 6:06 PM