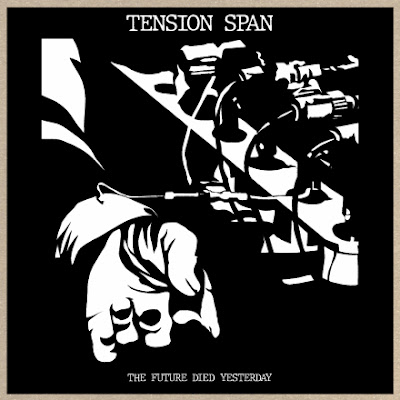 Here is how punk should be done. Bleak and grim. It is brought to you by Noah Landis of Neurosis and members of Asunder and Dystopia. The songs deal with the impending apocalypse the world is heading toward. Dark and tense as post punk, but it has the middle finger pointed at the sky as punk should. " the Crate Song" is as aggressive as Black Flag with burning chug infusing the guitars. "Filaments" is the first song where they back off of the aggressive and allow more the kind of atmosphere that would make this post-punk. Post-punk has always been one of the under currents that influenced Neurosis, so this should not be a surprise, but it fits into the cross roads where early punk came from and lines of sub-genres we define music now by where not yet common place. This just grooves.
They snap back with angrier punk snarl on "Ventilator". One of the great things about this album is that its song focused. They do not rely on the sheer raw power of speed or sonic rowdiness to just have a temper tantrum. They have purposeful lyrics that you can make out and the message comes across pretty clear. They take a crack at Christianity on "Covered In His Blood" that uses samples in a very Negativeland manner.  "Problem People' carries a great deal of melody in its mid-tempo clang. The phrasing of the lyrics feels more like Dead Kennedys, though the music carries a more ambient drone. When the bass line steps up into the mix, it does feel more post-punk to some extent on "Trepidation". There is an almost death rock creepiness to it. Matt Parrillo from Dystopia / Kicker handles the bass on this album, and I am impressed by his tone.
So far, the only time they get more focused on sound than song is the instrumental " I Have to Smile" which sounds cool, but pretty much just drones on the one theme. They take a more straight forward punk attack, with perhaps a more aggressive attitude. They lock back into a darker post-punk tension on "I Can't Stop the Process", another one that works off a drone more than using vocals, yet the samples [provide enough of a narrative. They split the difference between the two vibes on the last song. There is no question this album is a 10 as this is what punk should be. It comes out on Neurot Records September 30th
9.9
Posted by Wilcifer at 2:24 AM