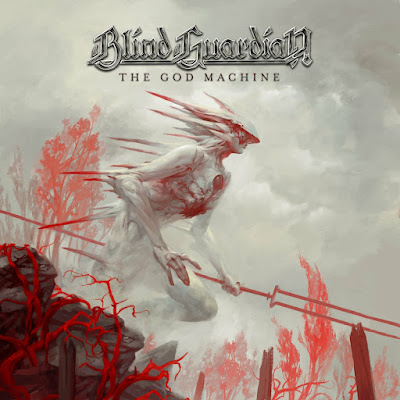 The guys have gotten aggressive as shit on the opening track, it's almost heavier than half the songs on the new Megadeth, until the big layered choral vocals come in, but hey that is what these guys do. When they get into some of the more grandiose color by numbers power metal majesty, I am less invested, though even here there is more grit than what your typical symphonic Helloween imitator might try. Hansi's vocal help the band keep their distance from their peers. At 56 he is singing his ass off. "the Secrets of American Gods" dials down the grandiose, but there are some layered choral vocals on the choruses which they are not fooling around with swinging for the fences, it might not fall as neatly into my preferences as the previous album did.  It reminds me of older Iced Earth in places.

You can hear Priest influence on "Violent Shadows" which finds the band thrashing at a more aggressive rate. "Life Beyond the Spheres' kind of coasts back on the typical gallop of power metal. "Architects of Doom" casts a darker shadow over things, before rushing off into a more epic thrashing. Hansi delivers a more aggressive vocal that reminds me of Warrell Dane's Nevermore days.  The vocal harmonies are not as stacked, which works better for my ears. What I want is more singing that measures up to what Hansi does at the beginning of "Let it Be No More". It is a power ballad of sorts, very dynamic in its arrangement.

"Blood of the Elves" finds them back in full on power thrashing mode. There is a more melodic section midway into it, but the drums pretty much keep going. Lyrically it is everything you could want for your Dungeons and Dragons game. Once again, their guitar solos are pretty shredding if you are into that kind of thing. The last song "Destiny" has a few cool melodic moments the further you get into the song, but generally aside from the tense undercurrent, plays more in lines with the typical rules of power metal, which I feel this band writes their best stuff when they deviate from that and lean into their darker side. I will give this a 9 as these guys are masters of their craft, they just play it too safe at times and in fall in the comfortable bounds of power metal.