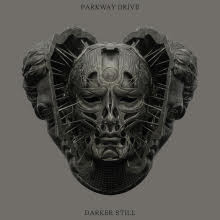 This one of those bands whose name is familiar with, but I have lumped in with all the bands that crawled from the ashes of Myspace. To press play and actually hear them is weird because, while my preconceived notions of them are not off base, they come at this in a weird way. It is like they digest an entire metal magazine and then use AI to regurgitate something that has all the parts of the bands in said magazine. There is a guitar melody that sounds like it could have come from Amon Amarth. They are despite this pedaling varied version of metal core. The vocals have almost a nu-metal bounce to them. Clicking around the internet to make sense of this the two biggest clues are that they are from Wales, and they also like Iron Maiden which might explain the Celtic melodies that creep into the guitars.
"Glitch" sounds like a burlier version of Linkin Park with reduced hip hop influence, but not devoid of it. Then the go back to what would almost be folk metal but run through this odd nu-metal filter on "the Greatest Fear" this time it even comes with a pirate like gang vocal. In borrowing from so many sounds they have diverted themselves from the confines of the bandwagon. The more I listen the more I understand what they are trying to do. This does not mean I also like what that is but can wrap my head around it. There is more of a Metallica sound to the title track. By Metallica I am talking about their fetish for power ballads, which is what separated them from the rest of the thrash bands, who tried to follow in their footsteps to less effective results. These guys pull it off pretty well, and if you are into guitar solos, they also dish out some pretty good ones. They are less effective on "Imperial Heretic" where the blending of styles does not work as well.
The almost rapped vocals leading into "If a God Can Bleed" might want to be more like Fatih No More, but it comes across like Mushroom Head. "Soul Bleach" is more typical of metal core, there is more groove to "Land of the Lost" which is what this album really needed all along to compensate for the awkward vocals. They often seem like they are trying too hard. The effects on the vocals smooth that out. They default to more of a nu-metal sound on the last song and lose what ground they gained with me, but to their credit they are taking the nu-metal core thing in a different direction with the Iron Maiden like guitar melodies. I will give this album a 7.5.
Posted by Wilcifer at 4:25 PM