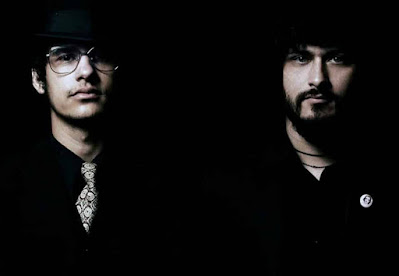 At 47 its impressive that Cedric's pipes are as pristine as they are. Let's face it this album would be a much different story if that was not the case. Some of this might be attributed to scientology, which he credits for getting him off drugs. Perhaps from the trippy haze around the album he just means hard drugs. Wink Wink. They have scaled back the sprawling progginess of what they do and reined things in to write songs not just jams. Impressively so with something like "Graveyard Love". "Shore Story" is almost more like a soulful ballad. It is weirder and more organic than say the Weeknd in this regard and done without a team of producers or songwriters.
The melodies are dripped over more interesting jazz like drumming on "Blank Condolences". Gone are the explosive Led Zeppelin like elements that marked their earlier work. Instead, things simmer nicely. "Vigil" sounds like a long-lost song from the 70s. When they do get more adventurous with the groove they lean into their Latin roots. "Cerulea" is another ballad, not as interesting as the first dip into this sort of thing. "Flash Burns from Flash Backs" finds them in more of a wander with the groove style of writing. "Palm Full of Crux" is another 70s slow jam. Woodwinds whistle in the background to thicken the atmosphere. The vocals melodies are more effective as well. If they were once like the Spanish Rush, they are now the Spanish Moody Blues.
They are dipping into a Ween like flavor of pop on "No Case Gain".  They fall back into balladry on "Tourmalline" . There is a more synthy tone to the groove of "Equus 3". The xylophone accompanying it is the taste of prog infused into this. If we are talking about "No Quarter" then I can hear the Led Zeppelin influence here. Speaking of influences if you mixed Yes with the Police the results might be along the lines of "Collapsible Shoulders" . Things continue getting trippy on the last song.  I will give this a 9.5 and see how it sits on me, the lack of rocking keeps it from being a ten but they wrote some great songs despite this.
Posted by Wilcifer at 5:33 PM

Email ThisBlogThis!Share to TwitterShare to FacebookShare to Pinterest
Labels: at the drive in, prog, the Mars volta