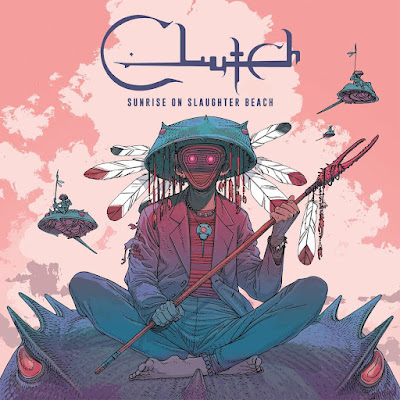 With their 13th album it might first feel like the Baltimore based band is circling what they did on the more explosive "Psychic Warfare" album, but the deeper you venture into it, this changes. While the opener does try to recapture that magic, they return to the grooves where their strength this. Lyrically the are geeking out with a Dungeons & Dragons themed song on "Mountain of Bone" where Fallon ponders if he is chaotic evil or lawfully good. The title track is more grooving, but the hooks on "Nosferatu Madre" might be some of the bands strongest. The Sabbath influence is more noted on this album.  Fallon's vocals are song and find his vocal cords expanding into a more striking range. This is even more impressive when you consider he is now 50.

This album not only finds the band locking into some of their catchiest song writing, but the most metal influenced as well.  Along with this comes darker vibes that can be felt on the creep leading into "Mercy Brown". Thye grooves are more syncopated, and blues infused here. Fallon's soulful belt empowers the band to do no wrong. The catch is when he is not at the peak of inspiration the band delivers what you expect from the band, but without the energy that is the tangible x-factor which elevates the band above most. This more typical sound can be heard on "We Strive for Excellence" . But even then, their color by numbers is better than most.   "Skeletons on Mars" is more nuanced. The guitars give things space, and the bass drives the song.

"Three Golden Horns" is all over the place. It stars off with a jazz feel, before going into more of rock feel.  It flows pretty much like most of their songs until after an angular breakdown, the prog interlude ends with a very metal riff. It took a few listens to all sink in but works well once it did. "Jackhammer Our Names" drones on a creepy match not unlike something Tom Waits might do, but Fallon is a better singer than Waits so it has a more soulful feel.  I will give this one a 9.5 and see how it sits with me over time. So far very impressed and in either case clear it sits next to the body of their work, with the kind of grace and class we have come to expect from these guys.