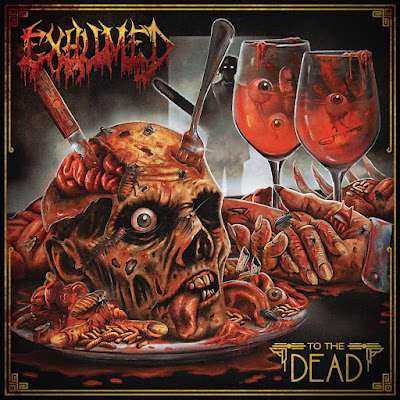 Exhumed are back. At least half the original lineup is enough for these guys to still have the old sound. The dual vocal attack that layers the lower gurgle vocal against the higher snarl, and plenty of riffs that cut like chainsaws, invoking a sound that is fueled by aggression, yet with hook that would make a thrash band envious. The second song is more brutal but does not grab your ears in the same way as the opening track. "Carbonized" finds the band getting more frantic and heavier with each song, by the third song they are at Deicide level of heavy.  Carcass is also an obvious influence with these guys in how the let the riffs groove at times which can be felt going into "Rank and Defiled". The vocal tradeoff is also like earlier Carcass.

By the time we get to "Lurid, Shocking Vile" the uniform nature of the monochromatic blood red their sound is painted with begins to be much less, lurid or shocking, then all you are left with is vile. "Undertaking the Overkilled "find the one problem beginning to become the rapid-fire attack, which on one hand might be admired by some in that it is relentless, but on the other hand the songs do not have room to breathe, so the heaviness begins to become white noise. There is a riff or two that does groove, but the rule here is cool riffs alone do not a good song make, I listened to "NEROTICA" multiple times, and it blazes past me as it fades into the background each time.

There is a little more nuance in the songwriting that cobbled "No Head Stone Unturned". It is when they lock into the thrash chug that the song is at its most powerful. "Defecated' becomes an exercise in brutality for the sake of brutality, The last song "Disgusted" us marginally more thought provoking than the previous song. This album starts strong then the need for speed overtakes it I will round this down to a 7. If you are a fan then you will dig it,, but you also do not ask much of your death metal in the first place. Being released on Relapse Records.