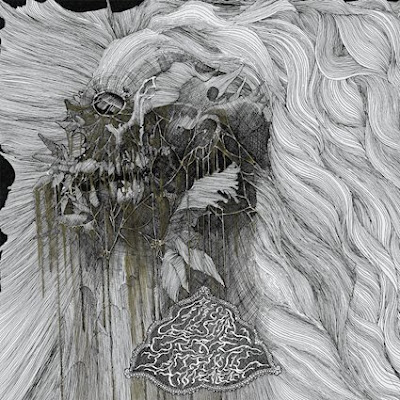 There is a great deal of black metal coming out as fall approaches. The question is ... but is any of it any good? Well, we are going to give this Finnish band another shot. It is raw and ugly. Dissonance and sweating in the crust of its own nasty ambiance. Relying too heavily on the trapping of the genre, like the tremolo picked guitar, though the drummer seems capable of doing more than just blast beats, however due to how this album is mixed, and that is a loose use of the term, the drums are buried with a crash of cymbal emerging. The vocal are incoherent howls. To some extent it works for the vibe they are going, for but when it comes to song writing one scowling gurgle begins to sound like another,

By the time we get to "Clemency" things are starting to buzz the same razor chords. Perhaps it is what I get for reviewing two black metal albums in a row, I gave the new Nordjevel a spin before launching into this album. This is rawer and more aggressive where Nordjevel is a more polished wall of sound, but these guys have more heart in the game. Guitar solos fight their way out of the din that is "the Abyss Exhales". Song wise things make more sense here than the previous song.  The vocal take on a leaner more Gorgoroth like snarl to have more form and function.

The punk edged chord progression to "Exaltation" once again shows that when bands like this let up on the charging blitz of feral energy and put their minds to writing a song they can. Less is sometimes more. The single note guitar melodies work much better. The vocals are left to be the sole churner of anger. When they blast behind the guitar solo, there is more cohesion, so it works. I am not against blast beats just against relying on them too much. The samples add a nice touch as well. The vocals lower into more of a death metal growl for the last song. There is also a shouting maniac, yelling lyrics as it gets deeper into the chaos.  For all it's raw power there is a great deal of heart at the core of this album so for that reason I will give it an 8.5.