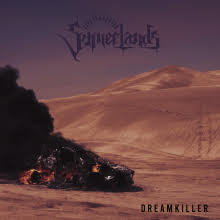 Half of this band from Philly used to be Eternal Champion, so stepping back into the slicker radio sheen of 80s hard rock not unlike say Queensryche is not a huge leap for these guys. I prefer the smoother vocal croon of this singer. They are capable of going into more melodic places with this guy. Their second full length finds them even more comfortable in these sonic spaces. "Heavens Alone" finds them almost flirting with commercial new wave sounds. Plenty of bands of this kind did that in the 80s. I think this finds the band in more unique sonic space when they go to these more overt hooks. It is just damn solid songwriting that works better than when they are heavier. I think this could be due to the fact in order to fully emote a heavy sound there has to be some kind of inner darkness or struggle to power it. These are well adjusted dudes who just like to rock out.
This can be felt on the more up-tempo gallop of the title track which faces with vigor but lacks the heft to be heavy, sure it is metal, but not dark or dangerous. Some of this can be the fault of the crisp and pristine production. If the heavier songs were roughed up a bit, they would not have a very uniform sound so that has them between a rock and hard rock place. They are really into guitar solos so if you are into that then you are in luck. "Night Ride" which has an almost "Holy Diver" like bass pulse to it but is more pristine like a Scorpions album. "Edge of the Knife" finds them in more of Dokken's zip code with its big arena sound.  "Force of a Storm " musically sounds like a lost track from "Ultimate Sin". The vocals have little in common with Ozzy, instead it is more of the furious Jake E Lee like playing.
Things get darker for "the Savior's Lie" but as far as the melodies goes there is a great deal of warbling bellows over the more exotic doom-tinged riffs, that works more of a throb rather than hooks. Sonically I like this direction, just tighten the melodies, but it works for what it is. There is a more power metal infused chug to the last song, with a riff that sounds more like old Dokken. These guys are great at what they do even if what they do is not the most original thing, not a ton of bands copying solo Ozzy and Dokken so there is a gap to be filled, I will give this album a 9. Very well done if the production was not so slick it might feel more like a long lost 80s album.  This album is oddly being released on Relapse Records.
Posted by Wilcifer at 10:59 AM