Her Shadow: "the Ghost Love Chronicles" 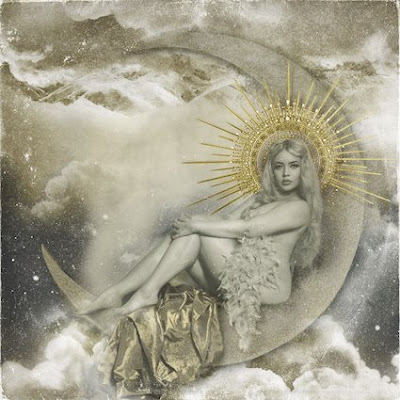 There is a 60s Phil Spectorish sound haunting the way this band from Finland layers their sounds. The rest of it falls into a Californian collage of surreal technicolored daydreams that David Lynch would be proud of. It's atmospheric pop, though the opening track sails along the sunset without latching onto the kind of blatant hooks that give pop it's sugar craving. "Raging Blue" has a solod guitar sound that rips out of it and the ethereal vocals find greater tensile strength in pulling melodies together. Anna Carolina's voice, hovers in a breathy stasis most of the time, and works more off filling the space with melodies from decades past. There is more of a rock under current to this record than you everyday dream pop band used to invoke.

I had to listen to "So Close" a couple of times before my ears caught on to what was happening.  Sure, we can make comparisons to Lana Del Rey. But there is less in the way of smooth folky torch singing. Anna allows herself to fade into the music, rather than make it an extension of her persona.  "Devil Inside" might be the most effective display of song writing, in every respect. The vocals lock into a catchy chorus. The first song that sounds like it has any common ground with the music of today is " Kinda Lovc You". There is a more dramatic feel to "Poisoned Moon" which could be the theme song to a James Bond movie with its smoky intensity.  The melody is more abstract and overcome by the ambiance until the dynamics shift. Blonde Redhead is another band whose sound comes close to this sonic zip code.

Lonely Surf rock reverb rings out on "Vigilante". The night air blows cool on the guitars while the rest of the arrangement just simmers in the background, until two minutes it converges into a more country amble. There is even an odd dash of psychedelia on the middle section, while her plea of needing a reason to say with you, has more of a Portishead vibe. The album's dreamiest moment might be " The Age of Velvet". It waltzes with a delicate pulse as piano holds the song together. What is unexpected is for this band to close the album with a thirteen-minute song. After an eerie minute of breathing guitar comes in. It's like folk that was intended to be the unsettling lullaby for the closing credits of a horror movie. This is the album's darkest moment, and I am fine with that. There are some droning parts that could have been trimmed back to make this song more effective, but there are some impressive prog like dynamics that it builds off of. In the studio a few minutes of drone could have been better suited for jamming out live. For a band whose main emphasis is the vocals, such excess, does not have a purpose in the studio.  I give this album a 9.5, as it gracefully creates something both familiar and unique. Out November 11th on Svart Records.