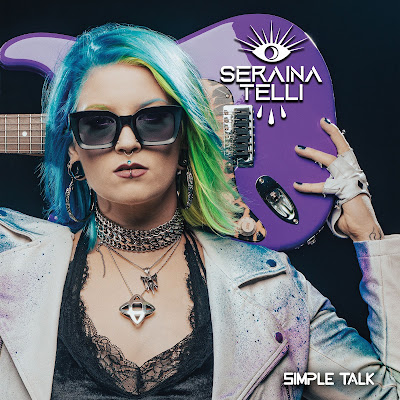 The ex-singer of the Swiss band Burning Witches , is going for a straight up rock flavor on her solo outing. She has pipes and an influence that dates back to 80s arena hard rock for sure. Halestorm would be the first band that common ground that comes to mind. There is more nuance on "I'm Not Sorry" which still carries an anthemic swagger, but with more tension in the verses. "Take Care" splits the difference between blues-based rock and 80s metal. The call and response feel proves effective in giving her voice room to breathe. There is a more Pat Benatar pop feel to " I Dare To". Not the most original thing, but it works for what it is.
"Remedy" is not a cover of the Black Crowes. It is not that soulful, but rather circles the same rock n roll parking lots that a great deal of female fronted bands do. Granted she has a very capable belt and power to her voice I think it might be swinging too hard for the pop fences. To her credit however she puts a great deal of conviction into each note she utters. She goes into a rock ballad with "Soldier of Fortune" , that makes me think she would also be a impressive country singer, as there is not a great deal of distance between what she does her and what modern country is doing.  The edge to her voice goes in a more Melissa Etheridge direction.
They go back into rousing rockers for "G.E.B" She hits some impressive notes when the chorus hits. The lyrics are also more thoughtful in her questioning of where she falls career wise in the grand scheme of things, like breaking the fourth wall.  The Melissa Ethridge thing hits a crossroad with a more Avril Lavigne like power pop on "Dreamer". The chorus is to cut and paste for what I like to hear but works for what she is doing. The vocal phrasing feels like it is trying too hard in places.  "Not One of Your Kind: is also more of power pop thing, but it works better. The cover of "Fever" works pretty well, very up tempo and closer to Elvis' version. "Remember You" is a strummed power ballad that showcases her voice well. Then they close with the metallic 'Medusa" which is numbered among the album's best songs. I will give this album an 8.5, if you are looking for radio friendly female fronted hard rock, it's one of the better offerings I have heard this year in that regard.
Posted by Wilcifer at 4:09 PM