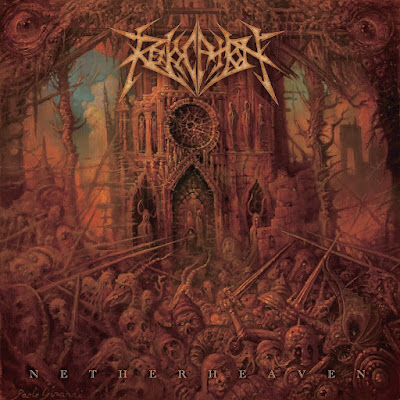 A great deal of hype is already building around this album, so once again my job becomes to see if this album lives up to it.  It starts off with kind of thrashing death metal that reminds me of post-"Domination" Morbid Angel. It is very tight in its attack and the guitar sound is mean but is this enough to fuel an entire album. "Lessons in Occult Theft" seems an appropriate title as there is a great deal of occult appropriation thematically.  It is on the more technical side of death metal with the vocals accenting some of the punches to give the song writing more hook than the first song. I am more impressive when it streamlines into the gritty chug of "Nihilistic Violence" which is the first song that I like. Not that I do not appreciate how good they are at what they do on the first two songs.

"Strange and Eternal " races at more of a breakneck speed. Just playing fast has never impressed me. There is little room for hooks or melody, and really just sounds like any death metal band that has already done this thing, Cader the first that come to mind. Three minutes in they do converge upon a cool riff, but the rule here is cool riffs alone does not a good song make. If you are into shreddy guitar solos this band has you covered. There is a sun refrain, but it feels more like an afterthought.  "Galleries of Morbid Artistry" does have a middle section that wanders off into melodic clean guitar. How this is arranged does not feel like the most organic progression, though there is more of a dynamic shift that the previous songs. I prefer the more progressive groove in the sinew of the riff that opens up "the 9th Chasm".  Even though it is an instrumental it is much more well written than most of this albums' songs.

"Godforsaken' is another example of how they are capable of writing effective song that are still heavy without having to sacrifice catchy songwriting. When they lean toward more of a darker vision of death metal it works better for me, with that what hangs in the balance is the question, will they take the easy way out and rely on speed to compensate for writing riffs that are memorable?  The last song finds them in the thrashier side of death metal which Goatwhore does better. These guys however might be better at guitar solos, which does not do much for me but dear reader it might be something you are into, thus our interests in music part ways . I will give this album and 8.5, better than most bands that do this sort of thing, but despite a few great songs and many ones that make me feel like they work, but do not make me feel more passionately about them, so I think an 8.5, is pretty accurate even taking fans of this sort of thing into consideration.