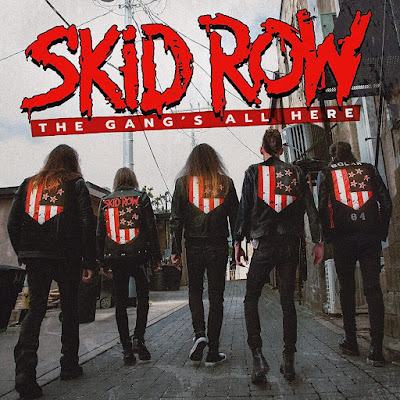 Ironically the first album by these guys that I have checked out post- Sebastian Bach is called "the Gangs All Here". Much like most bands in their position they are keen to find someone who sounds almost just like their old singer. This is the first album to feature drummer Rob Hammersmith, despite Rob being in the band since, 2010. This is also the band's first album with new singer Erik Gronwall from Sweden. The title is infected with the kind of 80s cheese that this band rose above with more of an edge. Erik does however prove he can do a fitting Sebastian Bach. The get caught up in a peppy upbeat glam sound on "Not Dead Yet" and while Erik can hit high notes, I would like to hear him pull off the kind of grit Bach was capable of on songs like "Piece of Me".
"Time Bomb" is the first song that has a heavier more forward-thinking sound. Erik has more power than grit, but when properly delivered, it works, I think he has not dealt with the same kind of troubled life experiences Bach had at his age so you can feel it in the energy of his voice, it is more youthful and optimistic, but much less wild.  "Resurrected" fall back into the trap of the 80s sound.  They get heavier in a way that is dynamic and does not force their new singer to be someone he is not on "Nowhere Fast".   "the Lights Come On", is true to Skid Row, but a step backward for them as a band, since they are trying to recreate the first album here.  The riff that opens "Tear it Down" reminds me of "Shout at the Devil" but overall, I like this song better than the previous one.
They continue to show their mastery of the power ballad on "October song". It is hands down so far, the album's best song. Is it good enough to earn this album a place on my iPod, well that is another story.  "World's On Fire" should be the album heaviest song, but that is not the case. This album is better than expected but I do not feel moves what they do forward like their previous albums, so I will round this down to an 8.5, which is still better than most of their peers.
9
Posted by Wilcifer at 5:09 PM