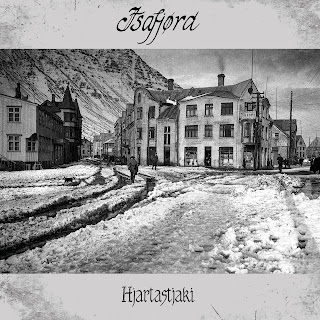 This band from Iceland is comprised of dudes from Pain of Salvation and Solstafir , though I hope you did not come expecting prog metal. Instead, you are getting a droning ambiance of something that comes close to the Cure or Mogwai. The vocals do get more forceful on the first song, and things swell dynamically, but the pattern in follows has more of a graceful shimmer to it that could have come from "Bloodflowers". The second song glides off into more Pink Floyd territory. The emotive vocals add another color that is in left field from the Floydian vibes. There is great guitar work as well with an incredible tone.
There songs in things shift and begin to go from post-rock to post-pop. There are a few verses whose melodies recall the more nuanced verses of "Wrecking Ball" by Miley Ray Cyrus. This is not to say it is devoid of rock, as it even goes into a more Juda Priest like metal riff at the climax of one song, though the vocals stay in a more emo place most of the time, their two voices work well together. Some of the electronic drum patterns, give a more Depeche Mode feel, though they never catch a dance groove. Some of the single note guitar melodies also remind me of Depeche Mode. The atmosphere always stays thick even when they are going into a more pop place. Thuis lingers on into "Kuldaro" . They sing in English on "Fjpord of Home" which is the one moment where they sound the most like Pain of Salvation.
After that they get back on a more Pink Floyd sounding vibe. The vocals being in their native tongue, give a more folk quality than the smooth David Gilmore like vocal that would take their sound there. This provides a raw quality to the emotive belt.  Breezier Sigur Rios styled moments come., with the vocals going into a higher wail. The guitar solos are all pretty tasteful and add to the song.  The last song is more of a slow core- post rock thing, with well layered vocals creating a breezy chorus. I will round this one down to a 9, sure this is a great sounding album, but some of the songs work off too similar a vibe to say it's a perfect 10, but it one of the best things of this type I have heard in some time. The album drops December 2nd on Svart Records.
Posted by Wilcifer at 4:31 AM