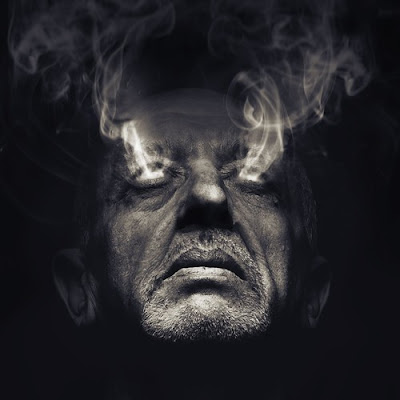 This Polish band returns with another dense slab of nasty sonics. This is their third full length, and you may remember us really digging their 2018 album "We Disappear". The continue to balance really heavy almost to the point of being abrasive sludge with a more atmospheric drone. The opening track pretty much splits the difference, to finds them starting off really heavy then drifting off into a gray shadow filled ocean. Where it is not the catchiest in terms of riffage or songwriting, they make up for it in the dark mood. It is however more gripping than the blast beaten "Solace". I think they are more convincing as a sludge band than a black metal band, and do not blend the sounds as organically as say Withered. They do stylistically fall between many of the cracks, but no matter how you want to label them, the difference in the first two songs is noticeable in terms of what resonates most uniquely to them.
They are back to blasting on "Odium". Once again, I am getting the same feel as I did on the previous song, that the drumming is taking them in a different direction than where what they do resonates the best for them as a band. They capture some great songs around the way and are almost convincing mean if I had not heard what they did on the first song. They return to something closer to what they opened the album with for the song "Sermon". I think this works much better. Once again hooky songwriting is not the prime motivational factor in plat, but the sonic punishment is pleasing in a metal manner. There are some black metal elements, but they work better when contrasted by the other sounds.
When they use riffs like the more chilling melody that opens "Abeyance" they are hitting the sweet spot, but it gets lost when they pour on the speed. This is balanced out as the song progresses and the blast beat is just a temper tantrum that bates into a more droning section. Sung vocals also appear. The way they are produced is pretty unique, though not unlike Fear Factory's early use or what Justin Broadrick does with Jesu. The growling is typically lower and less black metal. The more atmosphere the better with these guys as it it helps keep them from disappearing within the pack of like-minded bands. "Inference" is the best of both worlds for what this band is going for there is an increased black gaze ambiance, though they save really getting it all right for the last song, which is the album's best and finds them knocking it out of the park with a really sonically heavy song, that draws you in. Even with the lapses into black metal, it becomes a matter or personal taste and what to our ears sounds best for the band, but if we ask did they accomplish what they set out to do here, I think the answer is a yes, so I will give this a 9.
Posted by Wilcifer at 7:15 PM