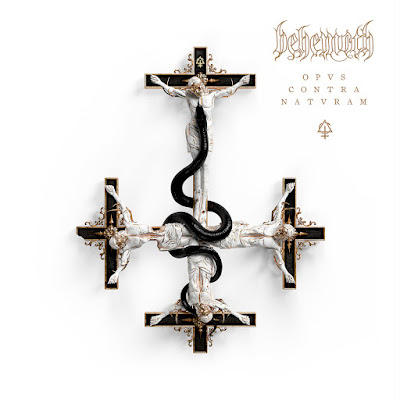 The opening track is more of a dramatic intro than a song leaving "Malaria Vulgata" as the first proper song. There are a few more guitar solos than what these guys normally do, aside from that it offers the same blackened blend of melodic death metal you came here for. "the Deathless Sun" shows what sets them apart which is Nergal's purposeful vocals. He shows you do not have to have a great singing voice to create hooks, you just need to put your voice in the right places. He doesn't scream or growl but uses a commanding snarl to fill these spots in the song.
The use of melody keeps things dark and not symphonic with the pulse running through "Ov My Herculean Exile". They are weaving great gods into their mish mash of brooding occult musings despite being Polish. I guess Polish gods are not as exciting, when it comes to Teutonic mythology Then it's off to Rome for " Neo Spartacus". I know he is supposed to be Thelemic in his beliefs and there is very little of that in the lyrics. Things get more black metal on the blasting yet creepy throb that is " Disinheritance". The blast beats are use well on this and not overdone. Lyrically it is all over the place thematically. Things keep to this more aggressive path though with more groove than the previous song on "Off to War" . He does not sing but speaks the phrases in a few places with more creepy conviction. One thing I like about these guys is the bass has a presence in their sound rather than getting lost under the guitar and drums which in and of themselves are a very dense machine.
"Upon a Pale Horse " is really well written and flows with a catchy groove. This is how this band clawed their way to the top of the game, it is true to who they are while still being a well-rounded song, proving you can still achieve this and not compromise when it comes to standing by a mean spirted vocal. It feels almost like "Domination" era Morbid Angel in this regard. This is also the first song I notice a Thelemic trapping to the lyrics. They fall back on the blackened bag of tricks before smoothing out into a groove on "Thy Becoming Eternal" and they are also back to hailing Satan. "Versus Christus" is more brooding, though works off impressive dynamics and is a fitting end to an album as is a step in a more effective direction for the band in terms of progressing as songwriters. I will give this album a 9.5, as it's the best thing they have done in some time.  This album is being released on Nuclear Blast.
Posted by Wilcifer at 5:34 PM