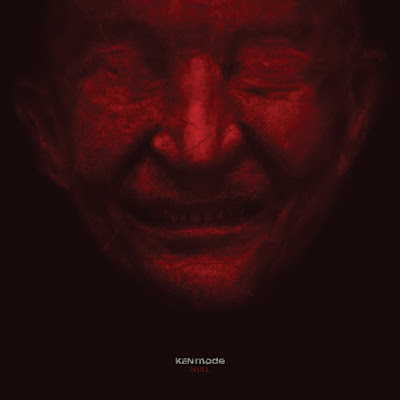 What I like right off the bat about the new Ken Mode album is it is darker and heavier. Random sax in the background gives more of an unsettling atmosphere to the opening track.  I really appreciate the lyrics ... I would like to congratulate you /for buying into the same narrative/ as everyone else". To call out the present-day world that does not want to be called out unless it follows the witch hunt of the day is a powerful statement and I wish more bands would find the balls to do this. They continue on this path but with a more up-tempo aggression on "Throw Your Phone into the River". The burly bass tone they got is a bolster to their sound.

From m a songwriting perspective the industrial drone of "The Tie" is not as interesting compositionally, but the fact they are willing to experimental more here makes it hard to fault them for it.  I like the stomping groove of "But They Respect My Tactics". Lyrically I like the theme this album is going with. This is an interesting listen from the other end of the spectrum from what I just heard it the new Bird in Row album. These guys have embraced a more muscular mind set, which makes them the more aggressive of the two bands. Overall, I would say this album is darker m but more of a externalized apocalyptic sense rather than the internal emotive feel of Bird in Row.

They headed into an even darker place on "Lost Grip" , which finds this ten-minute song hinging on how focused they are to stew in the brooding like a doom band might be inclined to. When the go rumbling of the rails on "the Desperate Search for an Enemy" they tend to sound more like other bands in the same sonic zip code, but it is not a deal breaker. The industrial shant of the last song, drones on , but is effective, it just takes a left turn from what I think are this album's strength aside from the fact it is dark. I will give this album a 9.5, which might make it one of this band's best yet.