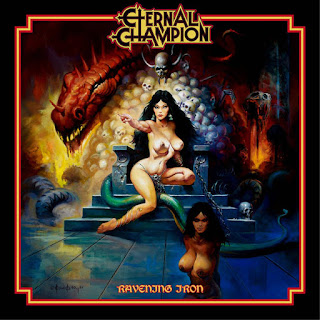 I normally do not like power metal. I mean I like it in it's original form Iron Maiden, Priest, Halloween, and even Iced Earth who are one of the last bands to really it do it right. All too often it doesn't have much in the way of power . They guys pack a punch in the first song and the vocals are not too cheesy. They came really strong on the first song, but the second song about their 1000s of sword, is not as strong. It doesn't suck it just did not feel as new and fresh as the first song. I also feel we are beginning to get some of the more overdone trappings here. They do offer redemption on "Skullseeker" . It has the classic sound , and some balls while still caring about song writing and not just throwing galloping riffs at you.

"War at the Edge of the End" runs off a great deal of harmonized guitar parts. It feels like it is more mired in tropes than the previous song. The vocals are a little more dialed in so I think that factors in. He has a more laid back style and is not overly operatic which I appreciate, but he could punch the melodies a little more. The guitar solos do not really wow me either. The guitar harmonies that open "Cowards Keep" feel a little more Thin Lizzy. The theory I had with the vocals on the previous , hold merit as the vocals are on it with this one and it's a better song, despite not being that jarring of a departure from they were doing.

They pick up the pace, not that these guys are ever slow, most of the time they border on being speed metal. I like what happens more on the verses than the rest of the song. They remind me a little of Sanctuary if Dane never used his falsetto. This guys barely does the yodel. It is pretty far back in the mix. When they do slow down on "Banners of Arhai" . I will give this on an 8.5 , it's pretty killer for what it is more often than not