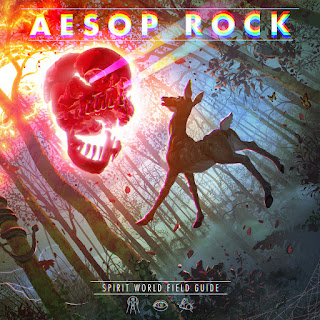 Opens with the title track which is really a spoken word intro. The first actual song is a lesson in what hip hop artists should do. He has a complex word flow weaving around the beat which has enough groove that your head never stops bobbing to the beat. The second song works off of what he already established works. On "Dog at the Door" he gives a minute and a half demonstration on how to switch up word play . He spits faster on "Gauze" which has a more interesting backing track , his lyrics darting in an out the paces in the music. If anyone doubts that hip hop can be just as vital and technically musical art form as any genre needs to listen to what he is doing here.  "Pizza Alley" find a more atmospheric mood underneath him which he makes work, but it is not as compelling as the first 4 song,
"Crystal Sword" is not only as compelling as the first four songs it might even be better. At least that is my first thought though the beat is not as biting so the groove is not as urgent. "Boot Soup" is really interesting , as it is different from the other songs, the musical shift it makes is what wins me over. The way it shifts in the last minute of the song is jaw dropping. "Coveralls " works , though perhaps not the top tier of the albums songs. "Jumping Coffin" has enough funk to it so it sounds retro and futuristic at the same time,  The futuristic path is the road taken on "Holy Waterfall" . This one is without question one of the album's best songs.
"Flies" is under a minute , while he crams more song into that you might expect. It does not go where the other songs can due to time constraints. There are 21 songs here , so with a double album like this I am not expecting every song to totally hit to the maximum. "Salt" musically paints a picture with the kind of surreal atmospheric weirdness we have known him in play in for sometime. "Sleeper Car" opens organ and then uses a more disjointed array of sounds . He is experimenting more with album for sure. "1 to 10" is more of an interlude than the other ditty that was under a minute.  "Attaboy" finds the funk again and it works well as he gets back on the spirit world lyrical theme.
There is a more organic almost rock feel going into " Kodokushi" then the drugs kick in. "Fixed & Dialated" he creates a hook just by saying " hold up". Timing is every thing. The drums on this one are kicking so that helps/. "Side Quest" is just over a minute, so it falls into the same place as the first song that was under a minute. He hits you with a lot of songs here. The album is familiar yet different and give you an example of what he is one of the best at what he does so I will give it a 9 since the parts that did not knock me off my feet from the get go just need to grow on.
Posted by Wilcifer at 11:45 AM