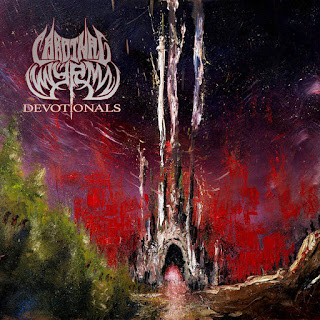 I am not sure what is going on here. Apparently this band thinks they are playing doom. There is little going on musically in the first song that makes me understand why they think this. This is a hipster metal supergroup with members of Vastum, Terebellum and S.C.R.A.M involved. They are obviously not the principle song writers for these bands because the song is barely coherent in composition. This is their fourth album so it has to be intentional./ The more snarled chat is the closest thing we get to a hook . The lead vocals are terrible in that they seem to have no clue with what the band is trying to do and so pitchy it makes me wince. It is more deliberate but not quite doom on the second song. More like a weird mix of grunge and proto thrash , with wanna bee Candlemass vocals . It is not until the third act of this song that we hear anything in realm of doom. The vocals are off doing their own thing during that moment.

There is more cohesion with the vocals on " Imposter" . If the pre Mike Patton version of  Faith No More were hippies during the "Introduce Yourself" days I can hear them doing something like this. It is some where on the outskirts of sludge and doom. I could see the vocals having a bit of death rock influence. This is the only way what they  yare doing makes sense."Selimesh" is the first song that has a more prominent doomy angel to it , not unlike Crowbar in the mood it invokes . More Sabbath influenced riff wise. The vocals begin to sour the song, the are more manic and remind me of old Gwar.

"Canticle" is the first song that I have really liked. It has punch and purpose. The vocals work with what they are doing. I get the impression this band is more punk than a bunch of LSD  dropping heshers. The pace picks up for "Abbess" and the results are less impressive. I do not hate what they are doing on "Nightmarchers" I suppose this fall into the parameter of doom to some extent . The last song also touches on doom themes and flavors, but kinda bores me as a song. I will give this album a 7.5. It has it's moments , perhaps I did not like it as much since it was not doom enough for me but if you like more meat and potatoes proto metal sound then I think a 7.5 is a fair score.