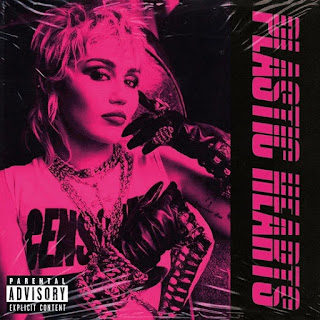 There are a lot of thoughts about this album. It is supposed to be her rock album. There is more guitar on it that part is true , but it is still pop which is fine. If it had harder drumming , then it might be rock, but what is going on the first song works . She has a great voice . She is a strong songwriter and has an ear for hooks. The bar is pretty high for her after the ep she released last year. The songs that do not grab me at first do grow on me. This is true of the title track. I like the way her voice is layered on it. She puts more balls in the edge she gives her voice on it as well. She has a powerful alto she can push into upper registers by will power alone. "Angels Like You" is a pretty dead on take of an 80's arena rock power ballad. I mean if Bon Jovi was doing this it would not be much different.
"Prisoner" is a return to the familiar pop path for her. She shares the mic with Dua Lipa. The fact is Miley has a better voice with more grit and personality than Dua Lipa. The hook of the chorus works well. " Gimmie What I Want" might be the album's best song as it drips of sex which is what I what her to sound like she is dripping with. "Night Crawling" is not what I expected but it works and Billy Idol who lends his voice sounds great . Miley would be capable of singing rock music quiet easily. "Midnight Sky" is a smoother synth wave fueled brand of futuristic pop, that is not sugar coated. It sounds like it was about her short lived lesbian relationship that was post divorce.
The traces of her country family tree be felt on "High" .  Her voice sounds great, but it took a little for this song to grow, as the hook is more subtle.  There is a still a touch of country lingering around on the other wise pop rock styling of " Hate Me" which is not far removed to what Taylor Swift used to do. Joan Jett joins her for the somewhat steamy " Bad Karma" .  Another song where she does not go in the direction you might expect . Jett sounds fine for what she does , she always had a cool sounding voice regardless of being a good singer or not. She  does honest introspection really well on the ballad "Never Be Me" .  "Golden G String" is an odd song. Lyrically it is interesting. The music behind it and the melodies are not perhaps as finely tuned as the other songs on the album.  It is the only thing that is some what like filler to me, but I will round this album up to a 10, despite it perhaps not being on the level of "Bangerz"  . Miley is only competing against herself here.
Posted by Wilcifer at 7:51 PM