November is Doom - Chained to the Bottom of the Ocean : " the Vestige" 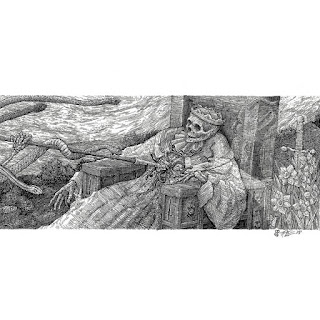 This album is heavy as fuck and should go on the record as being one of this year's most crushing albums. How does this fare in terms of song writing well lets find out. It opens some where between sludge and doom, with the vocals saying it over toward the sludge side. There are some Eyehategod vibes to this. I like the chugged attack to "Four Cubits and a Span" . There is more of a doom tempo and mood to " the Dead Who Climb up to the Sky" .  Even this some gains some traction and is not content to sit still. Speeding up into a blast beat for a couple of bars. The black metal influence is pretty mild. The song moves in a very interesting direction almost kinda indie rock.

"Hollow Feeds the Emptying Death" has more of a traditional stoner doom swagger to it. Not overtly blues , but in the Sabbath rumbling direction. Yes they do hit you wit ha very heavy pounding on " Escape! Harmony is Disclosure" , that doesn't get interesting until it finds more of a palm muted groove. Of the two covers they do The Death Cab For Cutie is superior to the Devo song. Granted I am also more familiar with the Death Cab song.

They cover a great deal of ground on "With Every Wrist Outstretched" . It goes from angular sludge to more of a death metal blast beat, though the vocals stay the same. There is dissonance and darkness so I am happy with the song. A little dynamics and melody and I am good to go. This one is not big on any melody , but it is interesting enough for me to compromise. "With Every Sword Unsheathed " has more of a stoner metal feel to it. When the clean vocals come in toward the end of "Out Brief Candle" I am not surprised even though they sound kind emo, because they covered Death Cab so that only makes sense. The album ends with a more dirge like take on sludge. Over all this album was fun, I will give it a 9.

Email ThisBlogThis!Share to TwitterShare to FacebookShare to Pinterest
Labels: 9, Chained to the bottom of the ocean, sludge