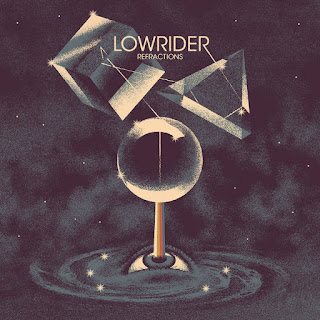 p>This Swedish band came before Monolord, the Truck Fighters and Graveyard, who are the countries exports when it comes to this kind of music.  More in your face than some of the other stoner metal I have heard this month. Granted we are only a week into the month. In some ways these guys remind me of Atomic Bitch Wax. Not as hopped up on cocaine in feel. The vocals sit on the songs in a manner more like Kyuss. The second song finds the vocals a little smoother , before they begin to jam out of this song and the vocals seems more like a flavoring to the jam rather than a narrative. Where All Them Witches did not care about vintage sounds these guys do making this a nod to an era.

"Sernanders Krog" is more coherent and less. This guy is not the world's greatest singer, but what he does works with what is going down here. I find with this album I have to sit and pay attention to the songs or this album all runs together as a jam . "Ol Mule Pepe" is more of straight up rock n roll song, that moves somewhere between Motorhead and Black Sabbath in it's pacing. NOt hte albums most interesting song as we have already heard countless bands do this sort of thing. There is more jamming that goes down after this song. If that is your thing then you will like it. I am sure it sounds great live, but since live is not a thing , It doesn't make sense to just write song that are fun to play live/.

The last song "Pipe Rider" is more melodic and dynamic. The vocals are more relaxed less overtly rock n roll. He was probably riding his pipes before he went in to records them . It is a fun ride for sure. I will give this album an 8.5 , I think this is a fair score when I weigh it against something like All Them Witches who brought a newer fresh sound to the table that I am more likely to listen to more.