November is Doom - Decembre Noir : "The Renaissance Of Hope" 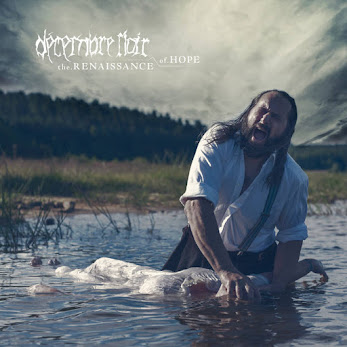 This is on the more death metal side of death doom, but is dark enough to bear mention here and from opening song it feels like the riff asre going to rock enough to make this German band well worth our time. The title track is less impressive though still good when it locks into a more aggressive and punchy groove, but as a whole is largely more death metal. Which is not a problem except for the  fact it begins to sound like all the other death metal I have already heard and a band like Pulchra Morte does better. I am beginning to see what the death doom formula is by song three. It seems to be take a death metal riff and layer a second guitar part than is melancholy. If you took out the second guitar part it would just be slower death metal.

This band is very good at what they do even if there is a formula in place. I think the casual not even listener but fan of the genre will not recognize what is going on here. Even die hard fans have allowed themselves to become so indoctrinated that they turn a deaf ear to it. They are more committed to death metal on 'Streets of Transience" for better or for worse. I do like the lower gothy vocals that come in. Though you can't trick me with Sisters of Mercy trappings alone.  They stay on the more deathly path with "Wings of Eschaton".  The melodic turn on the last song is welcome. The growled vocals are well placed to create more of a hook.

I enjoyed this album listened to it several times. While it works well within a formula , they have a knack not only for riffs , but how the eave them together to make the formula effective. I will give this album a 9. It is one of the better death doom albums , just a notch under the new Pulchra Morte, which says a lot.