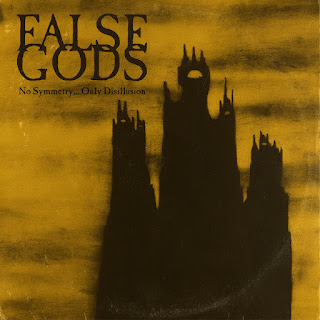 This band from New York as a fair bit of buzz about them. Is it warranted ? We shall see. The first song has more rowdy punk drive to it. It shifts into a riff that makes me think, this is what happens when hard core kids get into Black Sabbath. The vocals stay gruff , but have a little more melody to them. They slow down into a more of a groove and it works all the way around. Is it the most original thing I have heard? No but it works for me. By the end of the song it gets dismal in a more Crowbar manner.

Then "I Know Too Much" is pretty typical as it reminds us of my theory that sludge is really just doom played by crusty punks. This has more than enough punk roots to prove this . It is almost like blackened punk at first then slows down into more of a groove. The vocals are still pretty punk. When does go full on sludge it is punchy as hell. They stomp back at you with "All That's Left Behind" . They use a similar formula to one that occurs on previous song  'Lords of Emptiness" is not only superior to this song. But it might be the album's best song., It starts off as more of a battering ram and smooths out in a darker more melodic pulse.

There is a smoother strum going into the last song "Eternal Failure" The vocals are cried out in a manner closer to singing. It works of a singular throb that progresses well into a more apocalyptic dynamic I will give this one a 9, not sure how much I will listen to this one, but there is no denying  what they have done here. A dark enough vision of sludge that will appeal to fans of doom. More end times doom saying to it's gloom that mournful despair of what we think of as doom here , but a blazing success none the less.