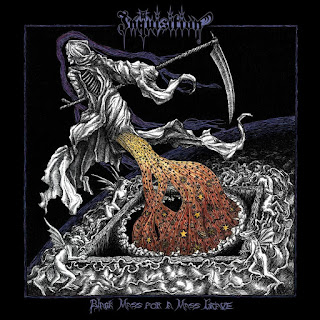 There is talk among critics regarding what a band maturing mean . Some think is involves some closer to selling out. Younger bands have a great deal of zeal and energy, when you get older you mellow as a person and one might hope not being a total wasted mess. Does this band have heavier albums? Yes. In fact the two previous to this almost steam rolled you with sound. This one finds the sound more stream lined. It opens with a more rock n roll riff. One of the thing I am most pleased with is one of the things some might not like is the atmospheric layer of guitar on the first tow songs. These melodic leanings  do not stop there, they continue perhaps even to a fuller extent on "Necromancy Through a Buried Cosmos" . It is a more traditional metal pacing , no that they have really exploded off into blast beats so far on this album.

The more traditional metal riff that opens " Triumphant  Cosmic Death" holds the kinds of hook to it that I want to hear more of . The blast beats do come in on this song, but there has already been such a range of dynamics it works . I do not hate all blast beats I just do not want them to be the default. The guitar lines become more wandering and intricate on "My Spirit Shall Join" . The eerie cold ness still sets the mood even in the more melodic moments which finds me still classifying this as black metal . You could almost say "Majesty of the Expanding Tomb" is mellower, than their previous effort. It kind of floats along like mist over a river. It should also be noted at Dagon's croak is not a droningly monotone as it has been in the past. I was ready for the pace to pick up by the time we got to "A Glorious Shadow" . Sure it find falls more in line with other thrash centric black metal, but still feel like the band. They stay in a similar drifting  forward on the languid waters of hell with "Extinction of Darkness and Light" .

"Hymn to.." find them still floating in the more placid parts of hell. In some ways this album reminds me of Deafheaven , it is certainly this bands most melodic work. It is a shame only their actual fans are going to hear and not a larger audience to the metal media's self righteous slant to these guys. If you do not want your metal bands  to be dangerous and bucking the moral norms like barbarians from hell, If you are like " Oh my god I did not expect them to be actually evil , the whelp you are a poseur who only likes the trapping of darkness and not the reality of it.  At one point in time Satanic bands were seen as riding the edge, now you have gothed out hippies pretending to be a kinder gentler take on Satanism that is false as hell. I want bands that are burning churches, eating children and hate everyone , They get some teeth back and sink them on the storming "Beast of Creation..."  I will give this album a 9, I can leave it on and let it play .