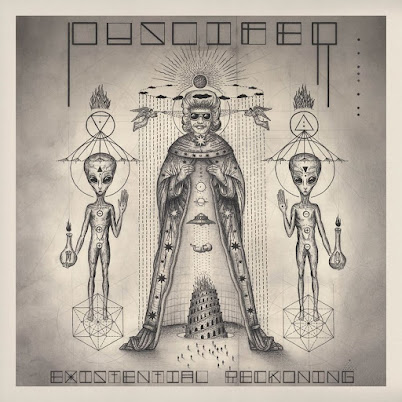 The first song falls more in line with the last A Perfect Circle album, softer and more focused on atmosphere, like a more indie lo fi version of Depeche Mode. It is well produced and the vocals sit just right in the mix . They nailed the sound they are going for and Maynard makes an effort that the song writing. Very synth oriented. Not that this project has not always been in that vein, it is not as focused on the groove as "the Conditions of My Parole" .  "Apocalyptical"  finds the vocals dancing around 80s like synth wave. There is more movement to this song so I prefer it to the opener. There is also a more defined guitar riff to this one. Not rock music, but looking in that direction. Things get progressively more interesting with each song.

A more solid sense of groove develops on "the Underwhelming" . "Grey Area" finds the more synth wave sounds returning , but with more motion in the ocean, and guitar accents to create an almost heavy feel. Then "Theorem" sounds like it was made with children's toys. There are interesting sounds , but not sure it's the best song. "Upgrade" sounds like if androids wrote a song for Depeche Mode. Maynard's voice sounds better on "Bullet Train to Iowa". If he puts effort into it his voice alone can save most songs, the problem is he sometimes wants to wander around the songs. "Personal Prometheus" grew on me, the composition is interesting and subtle. Lyrically it is also one of the strongest songs.

The way the vocals create a narcotic throb with "A Singularity " works well even with the 80s sounds around it. This could very well have been a Phil Collins song with a different approach to the vocals . The pace picks up a little for "Postulous" , that is more than enough groove for me. He finally puts some balls to his voice on "Fake Affront" /You can tell there is some Kate Bush influence on how the vocals fall when the song builds. I like hearing his lower register on the vocal going into the last song. I will give this album a 9.5 as it is one of the best releases from this project, and more interesting  than the last Tool album.